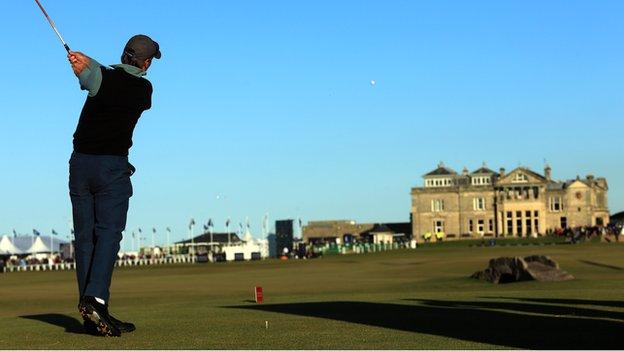 Peter Dawson has been in charge at the R&A for 13 years. In that time he has overseen massive and historic changes in the game of golf.

As the chief executive of a body steeped in tradition he has been a dynamo of modernism.

Golf is once again an Olympic sport, elite players are drug tested and women can, in theory, play in the Open. Last week the R&A, along with the USGA, announced radical rule changes on putting.

The R&A has become a contemporary business, a limited company separate to the Royal and Ancient Golf Club.

All these developments and more have passed across Dawson's desk and he has steered an astute and progressive route. The seas are somewhat choppier, though, when it comes to the latest changes he is overseeing.

Fury among golf lovers across the globe has been ignited by work that has just started on the famous Old Course of St Andrews.

The iconic 11th green is also being re-contoured, a depression filled in on the seventh fairway and mounds are being added to the right of the second green.

Further changes, overseen by architect Martin Hawtree, are due to be carried out on the third, fourth, sixth, ninth and 15th holes next year as the R&A seeks to stiffen the test faced by the world's best golfers at the 2015 Open.

Every other Open venue has undergone or will face a similar process. But this isn't any Open venue; this is the Old Course, the layout that provides a naturally formed constitution for golf course architecture.

"We obviously know the course very well and how it plays at all levels of the game," Dawson told BBC Sport. "No one knows it like we do or the Links Trust do.

"We did feel that there were a small number of things that would make it just that bit more demanding. Needs for greater precision, this is nothing to do with length. It's just the ability of the modern player."

The private clubs that use the Old Course were consulted by the Links Trust over the plans. "All of that went through remarkably smoothly," Dawson said.

"Normally at St Andrews the most heat, if you like, is caused locally. On this occasion, with these proposals, that did not happen. In fact the local support was pretty strong."

This process of gaining public approval, though, appears relatively limited. The 2009 changes to the adjacent Jubilee Course only took place after extensive public consultation and a series of open meetings with head greenkeeper Gordon Moir.

Here opinion has been garnered from a limited few and there has been scant regard for the millions of golfers who, at the very least, have an emotional stake in the Old Course and all that it stands for.

"If anyone is suggesting that the Links Trust should conduct some kind of worldwide phone-in consultation, I'm afraid that was never considered," Dawson said.

"I don't think it is any way practical to deal with the subject in that way, frankly."

Dawson was speaking in the same week as he jointly announced with the USGA a three-month consultation period over the proposed rule changes to putting techniques.

"Anchoring affects golf being played everywhere, the Old Course affects the Old Course. I think there is a difference to be honest," Dawson said.

Except that this particular links is the cradle of golf. It has been shaped by mother nature and by greenkeepers in a pragmatic rather than prescribed way down the years.

To many the notion of any design work being carried out on this natural masterpiece is utterly abhorrent. Yet it would be wrong to say that it remains unchanged from the founding days of the game.

"I was looking the other day at aerial photographs of the course from 50 to 60 years ago and compared them with now. Anyone who thinks they are identical needs to come and have a look at them, they are actually quite different," Dawson said.

"Let me tell you about the Road Bunker. In the past when the bunker has been rebuilt, which needs to be done every year or two because of the amount of wear it gets, the greenkeepers have gone and rebuilt it pretty much to their own eye.

"As a result it is never the same twice in a row. If you look at the film of when Doug Sanders missed the famous putt that year when he was in the Road Bunker you could see the top half of his body over the top.

"And if you go back to the 1890's it was a deep as it is now. All we are doing now is trying to find a design that we think is optimal. And mapping it very closely so that every future rebuild is replicated 100%."

The R&A's chief executive insists the changes are all relatively minor and that the current works will be completed within a fortnight. "It's men with shovels and wheelbarrows rather than bulldozers," he said.

If there is a need for change it is surely down to the fact that the golf ball travels too far at elite level. If it's all about stiffening the challenge and demanding more precision it is because players are using seven and eight irons for approaches rather than threes and fours.

Yet that Sanders Open of 1970 was also the Championship in which Tony Jacklin raced round the front nine in 29. Forty-two years on and still no one has bettered 63 in an Open at St Andrews.

The fear of that record being broken in 2015 is what lies behind the changes that are being made. But why? Do we really need to constantly make our golf courses more difficult? Does that make the game more fun?

The sport is about who makes the lowest score. You don't extend a marathon course or dig some potholes to make it more challenging because today's runners complete it too quickly.

Besides, the average score at the last Open staged at St Andrews, in admittedly challenging weather, was more than 73. It is no pushover and it does remain the ultimate golf course.

I have been lucky enough to play the Old Course off handicaps of 28, 15 and eight. On each occasion they have been the most enjoyable rounds of my life.

Not just because of the history of the place, but because at whatever level I was playing the course was relevant, challenging and rewarding.

The pros find it that way too and Tiger Woods, Ian Poulter and Luke Donald are among those to voice criticism at the perceived need for change.

Thanks to its unique, natural topography and the Fife elements, the Old Course provides the blueprint. It's why St Andrews is regarded as the Home of Golf and is loved and revered the world over.

And not just by the clubs lucky enough to use it as their course.

How did such golfing nirvana occur? Much more by accident than design. That's why Dawson and co are now facing such heavy criticism for meddling with a layout of such magical majesty.

Our conversation ended with the R&A boss saying: "Don't worry, it's still the Old Course."

He should know best - let's hope he does.