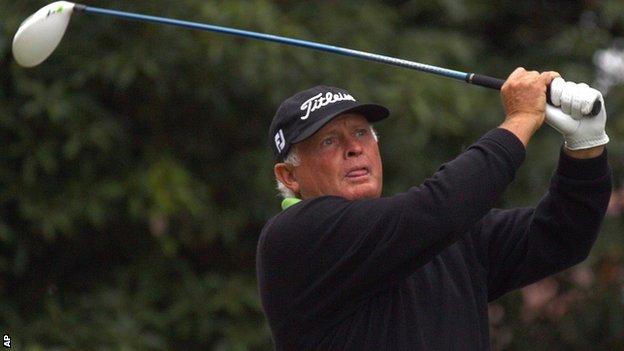 Peter Senior became the oldest winner of the Australian Open with a one-shot victory at The Lakes in Sydney.

The 53-year-old Australian finished four under after a 72 in fading light caused by a three-hour suspension in play when winds reached 50mph.

Meanwhile Charl Schwartzel finished 25 under to win the Thailand Open by 11 shots with defending champion Lee Westwood 16 strokes back in tied 11th.

In his first victory since the 2011 Masters, South African Schwartzel recorded his third round of 65, eclipsing Westwood's total of 22-under last year when the Englishman broke the course record with an opening 60.

The scoring was a lot higher in Sydney but Senior, who was fourth in the 1993 Open Championship and whose previous victory was the 2010 Australian PGA Championship, defied difficult conditions to play the final 11 holes in two under.

"It was probably one of the toughest days I've ever seen on a golf course," he said.

"I really thought these days were over but golf is a funny game. The key to today's round was that I never put any pressure on myself.

"If the conditions had been better the better players would have won, but these are conditions I thrive in, where I just battle it out."

Brendan Jones was second after overcoming a disastrous start, which saw four shots dropped in the opening three holes, to post three birdies and an eagle for a 71.

Pre-tournament favourite Adam Scott had an eagle, a double bogey and six dropped shots in a 76 to finish six shots behind Senior, one clear of overnight leader John Senden, who had six bogeys on his back nine in an 82.

American legend Tom Watson, now 63, benefitted from the calmer early morning conditions to post the only sub-70 round of the day, a 69 leaving him in a share of 28th at five over.