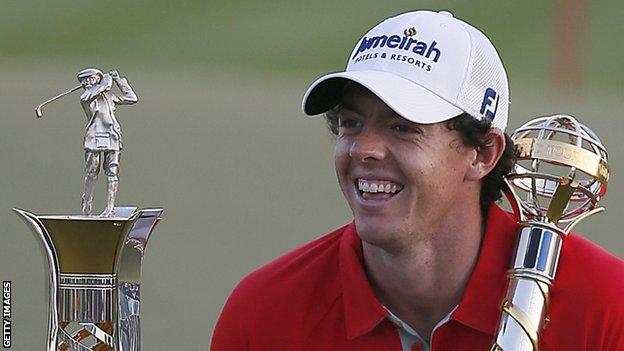 Well that was a restful break. Two weeks on from Scott Jamieson has already become the early leader in the 2013 edition of the Race to Dubai.

There's no time to waste in the golfing world, let alone respect for the calendar, and Jamieson made the perfect start to the new campaign with

The tournament was the first of a season that looks like having 45 events on the European Tour's International Schedule.

It should build to an intriguing finish with that will offer Race to Dubai incentives to attract the Tour's biggest names.

The Final Series comprises of the BMW and HSBC tournaments in Shanghai in consecutive weeks next autumn and the inaugural Turkish Open. Combined with the DP World Tour Championship, the closing month on the schedule is worth £19m.

Players who commit to the two Chinese events and then Turkey will receive a 20% hike in the Race points they earn from those tournaments. This will significantly boost their chances of a bumper cheque from the standings.

"We wanted to strengthen the end to the season," Keith Waters, the European Tour's chief operating officer, told BBC Sport.

So the European Tour now gets an enhanced big-money finish, which is some achievement in the current economic climate. "The last 24 months have been very challenging for the European Tour," Waters confirmed.

"My own feeling is that we are over the worst and we are now beginning to look forward again. We've obviously lost a number of tournaments in southern Europe but we have been able to replace them in places like Turkey, Russia and South Africa."

The irony is that European golf has rarely been stronger. Four of the world's top six players are from the United Kingdom and eight of the leading 20 in the rankings are from the continent.

Waters knows the biggest challenge his Tour faces is to make sure those big names play their share of tournaments on his schedule. "Yes, that is true," he admitted.

"When we manage to have the right ingredients of dates, sponsor and location, we are still very, very successful at finding the big dollars and the big events.

"But when those ingredients don't all come together it's a challenge. We are still very happy to announce 45 tournaments and we hope to add a couple more in the next few weeks."

Making the most of McIlroy's ever-growing status must be of primary concern. For example, ensuring the flagship BMW PGA Championship remains part of the world number one's US Open preparations would seem vital.

That Wentworth event remains the only regular Tour event in England and can only grow in significance if it continues to attract Europe's biggest American-based stars.

"We know our challenges in different times of the year and it is very difficult because the best players will not play 45 tournaments."

There is no escaping the fact that America bosses the calendar. It has the biggest events and the rest of the world has to fit around the PGA Tour.

Given the depressed European market there has never been a greater requirement for a World Golf Championships tournament on this side of the pond. Currently there are three in America and one in China.

"There is a need," Waters admitted. "I think it is probably right that we do have a World Golf Championship with the players that we have at the moment.

"I think it would be good for Europe. At this moment it is particularly challenging because of the financial problems we've had, but hopefully over the next few years we can address that.

"There are restrictions on how many World Golf Championships there can be, so that's not straightforward. But I'm hopeful we'll have some big international events adding to the schedule in the next few years."

Throughout our conversation "challenges" was the recurring buzz word. The same also applies to the Ladies European Tour, whose schedule concluded in Dubai at the weekend.

Shanshan Feng ensured another big prize headed to China, while Carlota Ciganda wrapped up the money list. The Spaniard became the first to achieve such a feat in her rookie year since England's Laura Davies 27 years ago.

Ciganda will be just the sort of character new LET boss Ivan Khodabakhsh will want to build the Tour around.

The former CEO of World Series Boxing takes over from Alexandra Armas having vehemently denied allegations of trying to fix fights ahead of the London Olympics.

To say the least, Khodabakhsh is an interesting choice and it will be fascinating to see how he approaches his new job.