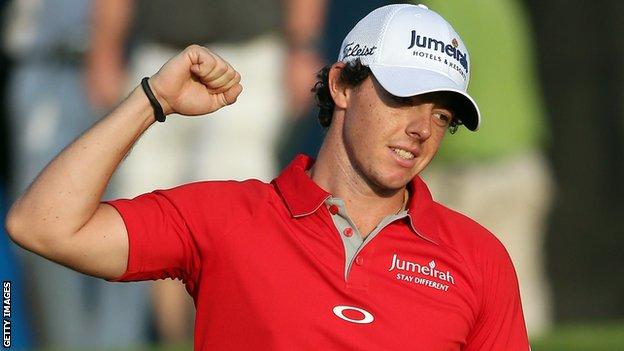 World number one Rory McIlroy has been awarded the 2012 Golf Writers' Trophy ahead of Europe's Ryder Cup team.

The 23-year-old Northern Irishman had a spectacular season, winning the USPGA Championship by an eight-shot margin as well as four other tournaments.

McIlroy also emulated England's Luke Donald by topping the money lists on both sides of the Atlantic.

The Ryder Cup side, of which McIlroy was part, came second in the voting, followed by Ian Poulter.

"The 2012 season was a superb one for every aspect of European golf and that comes across when you look at the names of the players in contention for the Golf Writers' Trophy," said McIlroy, recently named as the PGA Tour's Player of the Year.

"To come out on top of that list is a great honour."

Poulter was one of the key architects of Europe's magnificent comeback in Chicago, making five birdies in a row to win a vital fourball match alongside McIlroy and finishing the Ryder Cup with four points out of four.

Chapman enjoyed a fairytale season when he won the Senior PGA Championship and the US Senior Open, a double only previously achieved by Gary Player, Jack Nicklaus and Hale Irwin.

The Curtis Cup victory at Nairn completed an unprecedented clean sweep of all four of the main trans-Atlantic trophies - Ryder, Solheim, Walker and Curtis Cups.