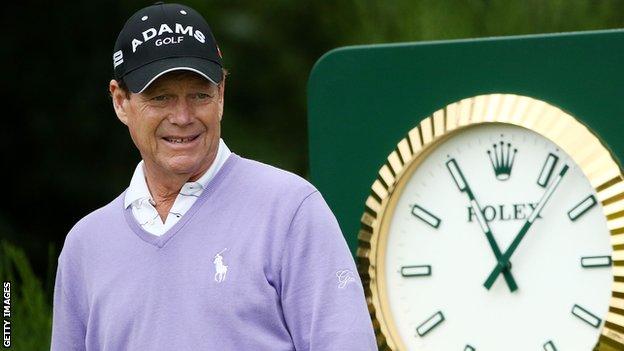 Appointing a figure as revered as Tom Watson to lead the United States' quest to regain the Ryder Cup in 2014 is as inspired as it is necessary.

The PGA of America have said 'enough is enough'. After five defeats in the last six matches they've sought a radical remedy.

An established policy of using veteran major-winning players in their mid-to-late forties to captain the US team has been ditched. Instead their president Ted Bishop has turned to one of the genuine legends of the game.

Watson was skipper the last time the US won away from home. That was back in 1993 and few after that victory at the Belfry could have envisaged Europe's subsequent dominance of the biennial clash.

Back then he was a young captain, having just turned 43. Now he becomes the oldest to lead his country in the Ryder Cup. Watson will be 65 by the time the Gleneagles match comes around.

For the first time in the Tiger Woods era, the US has a leader of greater golfing stature than the former world number one. Yes, Woods has fourteen majors to Watson's eight but the older man commands a level of respect that only the great Jack Nicklaus can beat.

Furthermore, Watson is more in touch with the modern game and its leading players than Nicklaus. He still makes cuts in Tour events and majors and only last week finished 28th at the Australian Open.

Three years ago at Turnberry, Watson lifted himself to a new level when he came so close to what would have been the greatest major win in the history of golf.

He was a six foot putt away from winning a sixth Open title at the age of 59. Even though he eventually lost out to Stewart Cink, the fact that he even made it to a play-off at such advanced years was still one of the biggest feats the game has ever seen.

You can rest assured Watson will have all 12 of the American team in his thrall at Gleneagles, Woods included. This is despite relations between the pair being frosty in recent years.

Watson was very critical of the current world number three in the wake of his sex scandal three years ago.

But Watson may prove the man to finally inspire Woods, who has been enigmatic to say the least when representing his country against Europe. "I feel Tom Watson might get the best out of Tiger Woods," Bernard Gallacher told BBC Sport.

The Scot was Watson's opposing captain at the Belfry in 1993. "Woods has never really been the leader on the golf course at the Ryder Cup and I think they feel that Tom will get the best out of him," he said.

Gallacher agrees that for the first time America will have as captain a bigger personality than Woods the player. "Exactly, and it will shift a lot of responsibility off Tiger Woods," the three-time European skipper said.

"In my opinion this is a great appointment for the Ryder Cup. He'll be very good in front of the press and the television and the radio.

"In 1993 he was like a player-type captain. He's not like that now. Some people might think he's a bit distant from the players but he isn't really because he still plays well at the Open and he turns up at the majors and is well in touch."

Watson's love affair with Scottish golf that stretches back to his first Open win at Carnoustie in 1975 is another huge asset. Four of his five victories in the Championship came on Caledonian links.

"He's very, very popular in Scotland and I think the PGA have taken that on board," Gallacher said.

More significantly Watson will be a commanding figurehead in the American team room. Players will jump to his call rather than the other way round, a factor that has undermined the US cause in the modern era.

This appointment will also impact Europe's decision as to who will succeed Jose Maria Olazabal, the Spaniard who led Europe's famous fightback at Medinah this year.

Darren Clarke and Paul McGinley are vying for the job and what was being seen as a close contest may now be swinging the way of Clarke, who is perceived to be the bigger personality.

"I've been a big fan of Paul McGinley," Gallacher said. "I think he's the best choice, not because he's a better person than Darren Clarke, I just think Darren should be trying to make the team.

"I feel strongly Darren would be the ideal choice in America, but this might change things. They might feel they need a big guy to oppose Tom Watson.

"I don't actually think it makes that much difference but they may think that way," Gallacher added.

The European Tour's Tournament Committee meets in Abu Dhabi in mid-January to discuss their next captain.

They will do so knowing that America has made a huge statement about their desire to win back the trophy.

We wondered how the miracle at Medinah could be matched by future Ryder Cups. Less than three months on, we have the answer.

Watson leading the US at Gleneagles ensures no deterioration in the allure of this great contest in 2014. Indeed, it will be enhanced.