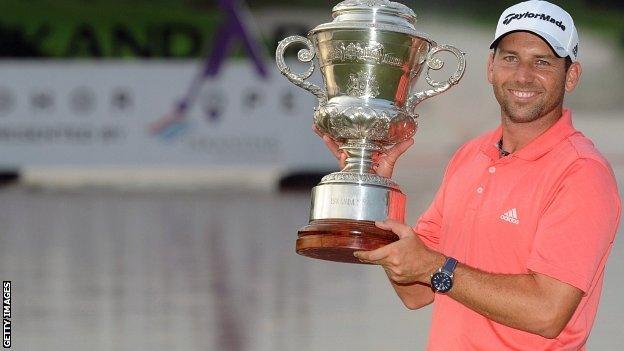 Sergio Garcia won his second title of 2012 with a stunning final round at the rain-disrupted Johor Open in Malaysia.

After storms caused the tournament to be cut to 54 holes, the Spaniard hit a superb closing 61 to finish three shots clear on 18 under par.

Garcia, 32, birdied seven of the first nine holes and held his nerve after a long rain delay on the back nine.

Jonathan Moore of the US also shot 61 to finish second, with Thailand's Thongchai Jaidee third on 14 under.

Garcia's final round was the lowest by a winner in Asian Tour history, and followed his victory at the PGA Tour's Wyndham Championship in August.

"It has been a long week obviously because of the weather and I couldn't have asked for a better way to end the week," said the world number 20.

"It has been a great experience as this is my first time in Malaysia and to be able to win is a treat. The most important thing about playing under these kinds of conditions is to keep the momentum going, especially with so much disruption.

"It's hard to keep up mentally and I sort of did that yesterday morning where I finished poorly but today I came back strongly."