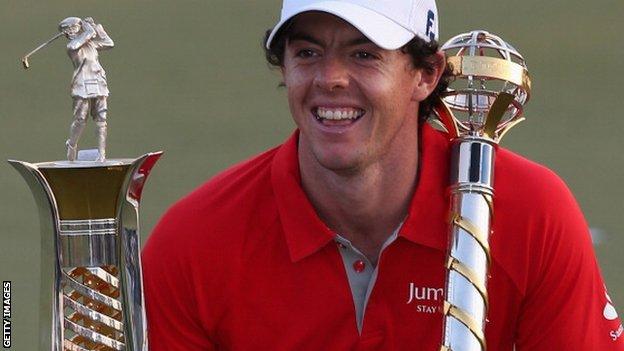 World number one Rory McIlroy has said being named European Tour golfer of the year is the "icing on the cake" after an "amazing season".

The Northern Irishman ended the year as the world's best golfer, topping the European and United States money lists.

The 23-year-old, winner of the US PGA Championship in August, said the list of previous recipients of the award read like a 'Who's Who' of his sport.

"I'm delighted to now be a part of that in the history books," said McIlroy.

The Northern Irishman was voted PGA Tour Player of the Year by fellow players on the US Tour earlier this month, becoming the youngest player to win the award since Tiger Woods in 1998.

"Everyone who knows me knows how special the 2012 season was," said McIlroy, winner of four events in the States in 2012, as well as the World Tour Championship in Dubai.

"A couple of wins, including a major, and consistent performances in big events all helped me win The Race to Dubai for the first time.

"To win that was a massive highlight of an amazing season and I hope it will be the first of many.

"Now to have been named as European Tour Golfer of the Year puts the icing on the cake."