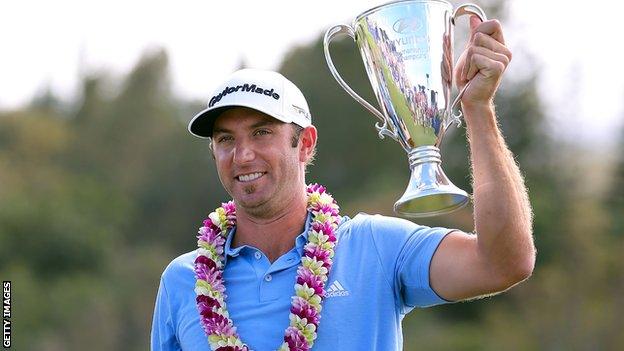 American Dustin Johnson made a winning start to 2013 by claiming a four-shot victory at the weather-affected Tournament of Champions in Hawaii.

After three days of play had been suspended due to severe winds, the tournament was reduced to 54 holes with two rounds played on Monday.

Johnson started Tuesday with a three-shot lead and secured victory with a five-under 68 for a total of 16 under.

Ian Poulter, the only Briton in a 30-man field, finished 11 shots off the pace.

Stricker, who won the tournament last year, carded a four-under 69.

Stricker was always facing a tough task in catching Johnson, who made a great start to the final round with three birdies in his first eight holes.

A double-bogey on the par-four 13th dropped him to one under and briefly threatened to derail his hopes.

But an eagle on the next hole before further gains on the 15th and 18th made the win safe.