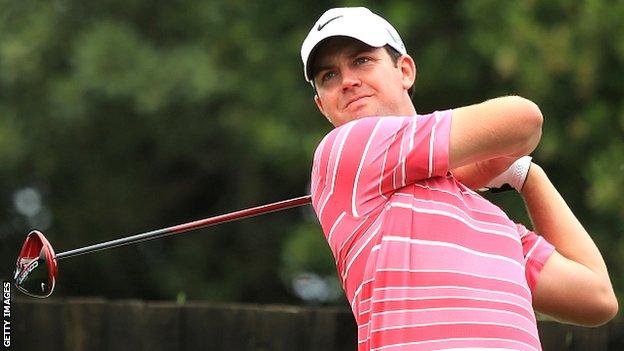 Scott Jamieson will take a five-stroke lead into the final round of the Volvo Golf Champions event in Durban.

The Scot carded a four-under-par third round of 68 for a total of 15 under, five clear of Louis Oosthuizen, Thongchai Jaidee and Julien Quesne.

Oosthuizen held a one-shot overnight lead, but went to the turn in 40 and needed three birdies in the next four holes to reignite his hopes.

Ireland's Shane Lowry almost won himself a lorry on the final green. That is the prize for a hole-in-one on the par four. His drive kicked off the bank of a bunker and was rolling towards the hole, but pulled up four feet short in the wet conditions

Padraig Harrington and Francesco Molinari sit two back on eight under.

But 29-year-old Jamieson, who came into the tournament as a member of the world's top 100 for the first time - at 100th, is the firm favourite for victory at the European Tour's opening event of 2013.

The Glaswegian is part of the winners-only 33-man field thanks to his victory at December's Nelson Mandela Championship, also staged in Durban.

His main threats are 2010 Open champion Oosthuizen, Thailand's Jaidee and Quesne of France after they went round in 67, 73 and 74 respectively.

Oosthuizen's poor front nine saw his lead eroded and Jaidee was the first to take advantage, going three clear with birdies at the second and third.

But the Thai took six at the long eighth whereas Jamieson hit a brilliant second shot to five feet and made it for eagle.

That three-shot swing brought him level and he moved three in front by chipping in from 25 yards at the 11th, making a 12-foot putt on the next and then leaving himself a tap-in at the 339-yard 13th.

The gap became four when Jaidee missed a short putt on the 16th as heavy rain returned and he also bogeyed the 273-yard 18th.

Jamieson dropped a shot on the 17th after missing the green, but chipped close at the last to pick up a further stroke.