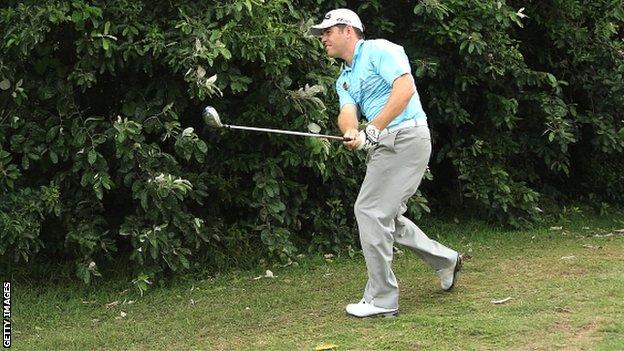 Jamieson of Scotland, who won his first European title last month, birdied two of the first four at the Durban Country Club but three shots soon slipped away.

Oosthuizen had seven birdies in a 66 to finish 16 under, and his sixth title put him fourth in the world rankings.

A birdie at the last saw Jamieson finish second with a final round of 72.

"Louis is a major champion - there's no shame in losing to him," said Jamieson. "I gave it my all, but it wasn't to be."

He can console himself with the fact that he has started the season first, third and second and will move up 30 places to a career-best 70th when the new world rankings are announced on Monday.

"I'll take that - absolutely," he added.

Following his victory in the inaugural Nelson Mandela Championship in Durban, Jamieson, who had nine birdies in his 64 on Friday, would have broken into the world top 50 with another success in the city.

He was still five ahead with 14 holes remaining but a wild drive led to a double bogey at the fifth and after South African Oosthuizen had taken the lead with seven birdies in 14 holes, Jamieson dropped further behind after he pushed his approach into a wet plugged lie in the bunker at the 16th and could not save par.

"The double bogey was a kick in the stones, to put it politely, but I had tons of chances and couldn't take them," Jamieson said.

Oosthuizen, one of three players sharing second after the third round, was in the penultimate group and dropped only one shot all day, holing a tricky downhill par putt from four feet on the final green to set the target.

Needing to eagle the short par-four final hole to force a play-off, Jamieson hooked his tee shot and it finished on the first tee.

Remarkably he almost achieved the unlikely feat with a magnificent chip that trickled to within an inch of the cup, although the resulting birdie saw him move ahead of Thongchai Jaidee and secure outright second.

However, he became the first player to lose a five-shot 54-hole lead on the European Tour since Hennie Otto at the 2008 Madeira Islands Open.