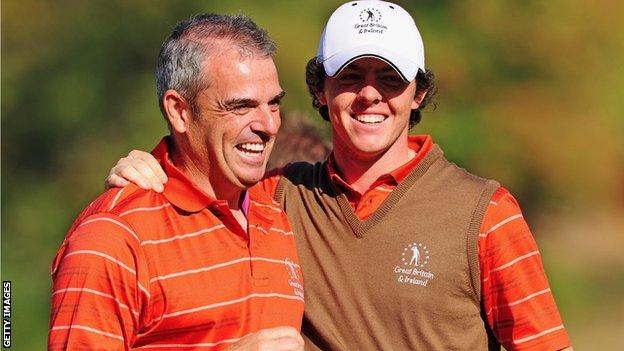 World number one Rory McIlroy says the Ryder Cup captaincy should be a "one-time thing" as he again backed Paul McGinley to skipper Europe in 2014.

A meeting in Abu Dhabi on Tuesday will decide who will captain the Europeans against a United States side which will be led by Tom Watson at Gleneagles.

Colin Montgomerie, captain in 2010, has been linked, but McIlroy tweeted: "RC captaincy should be a one-time thing.

"Everybody deserving gets their chance and moves on."

McIlroy's tweet continued: "Would love to play under Paul McGinley in '14."

It is not the first time Northern Irishman McIlroy has gone public with his support for McGinley.

Last October he said the 46-year-old Irishman would be the ideal choice.

Darren Clarke has also been linked with the captaincy in 2014, but the 2011 Open Champion admitted recently that "this may not be my time".