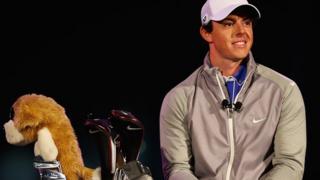 Rory McIlroy expresses his delight after being unveiled as Nike's new brand ambassador in Abu Dhabi.

The world number one will become one of the highest-paid sports stars in the world as a result of the lucrative deal.

"I am in a great place at the moment and hopefully it will only get better," said the Northern Ireland golfer.

McIlroy also reiterates his support for Paul McGinley as the man to captain the European team at the Ryder Cup at Gleneagles in 2014.