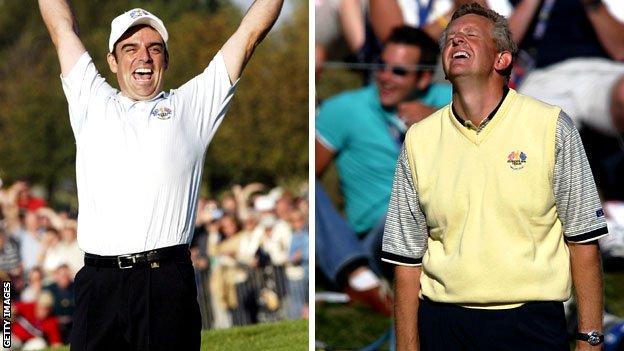 The process of deciding who will be Europe's next Ryder Cup captain has become a contentious battle of wills.

Rarely has there been such intrigue over who will lead the continent against the United States. The only certainty seems to be that the Abu Dhabi meeting on Tuesday evening will be long and potentially argumentative.

Paul McGinley has the support of Europe's leading players but it remains to be seen whether this is reflected by the tournament committee who decide on the appointment.

Leading figures on that panel are not enthusiastic about the Irishman and there is a swell of opinion now that there could be a shock return to the job for 2010 winning skipper Colin Montgomerie.

This follows the apparent withdrawal of Darren Clarke's candidature. The 2011 Open champion wants to concentrate on his playing career and now becomes an influential voice in the committee room.

It was Clarke who suggested that Europe might want to look at a former captain to provide big-name opposition to an American side led by eight-time major champion Tom Watson.

This paved the way for Montgomerie's name to come into the frame. He lives close to Gleneagles where the 2014 match will be played. And although he has avoided putting his name forward it is known that he would love another crack at the captaincy.

Until Clarke made his suggestion it was thought Montgomerie was out of the picture because of Europe's unwritten rule that leading the continent would be a one-time only appointment.

Montgomerie is also on the tournament committee and would have been a strong and eloquent advocate for McGinley. If the Scot is now a candidate the Irishman has lost that support.

Instead McGinley's most vocal backers are leading players like Rory McIlroy, Luke Donald and Justin Rose. McIlroy tweeted at the weekend that he believes the captaincy should be a once-only appointment and that he would love to play under McGinley in 2014.

How much heed will be taken by the committee? Or will they be swayed by Clarke's argument for the need to have a big-name appointment to counter the Watson factor?

Speaking before the Northern Ireland man's intervention, Montgomerie insisted Europe should not change course just because America had appointed such a revered figure as Watson.

"It shouldn't colour our judgement at all," Montgomerie told BBC Sport. "We should have only one criteria and that's picking the best man for the job. It doesn't matter what America have done."

McGinley appeared the outstanding candidate. Aside from commanding the respect of Europe's leading players, he has played on winning teams in all three of his Ryder Cups.

Famously, the Dubliner holed the winning putt in 2002 and has been a successful vice captain in the last two matches.

He has also been a brilliant and victorious leader for Great Britain and Ireland in two Seve Trophy matches.

In 2009 McGinley cajoled a supposedly weaker GB&I team to a 16½-11½ victory over a continental European side led by Thomas Bjorn.

The Dane chairs the tournament committee and if Clarke is out of the running Bjorn may emerge as a candidate for 2014 as well.

Members of the European Tour's management, led by chief executive George O'Grady, will also be present at the meeting. It is thought they favoured Clarke for the job.

If the mood in the Abu Dhabi hotel room goes against McGinley they will be denying themselves appointing a sharp tactician who also possesses impeccable public relations skills.

But trying to gauge which way they will decide is difficult to fathom - and with the growing feeling about Monty, McGinley could miss out this time.