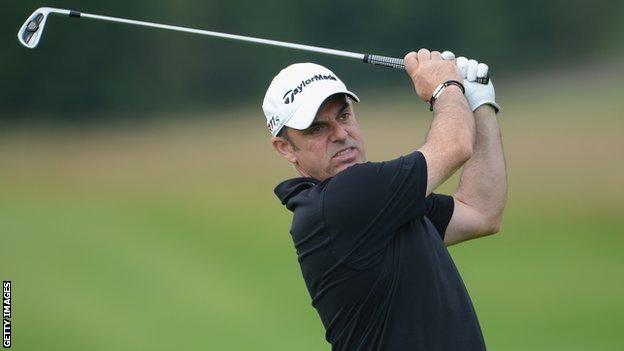 Rory McIlroy says it will be "a disappointing day for the European Tour" if Paul McGinley is not named Europe's 2014 Ryder Cup captain.

McGinley and Colin Montgomerie are the leading candidates to skipper the team at Gleneagles in 2014.

The European Tour's tournament committee meets in Abu Dhabi at 15:30 GMT on Tuesday to discuss the role.

Darren Clarke, the 2011 Open champion, was also in the frame but formally requested not be considered on Tuesday.

McIlroy told BBC Sport's Iain Carter: "I think it will be a disappointing day for the European Tour if it doesn't go Paul McGinley's way.

"I feel very strongly about it and I have voiced my opinion, and hopefully they will make the right choice."

Montgomerie, the winning 2010 captain, is a late contender but seen by some as a bigger name than McGinley and better able to oppose America's choice, Tom Watson.

"It would be a dream come true if I could be seen to be captain at home in Scotland," said Montgomerie.

Dubliner McGinley, an assistant in the last two matches, is a popular choice with the players and enjoys support from Luke Donald and Justin Rose as well as double major winner McIlroy.

Donald tweeted: "I hope Paul McGinley gets his chance, he's been an amazing Vice Captain and deserves an opportunity #2014RyderCup."

The 46-year-old McGinley played in three Ryder Cups and holed the winning putt at The Belfry in 2002.

He may not have achieved as much individual success as eight-time European number one Montgomerie, but it is widely felt he did enough as a vice-captain and as Britain and Ireland's two-time winning Seve Trophy captain to indicate he has the ability to lead Europe.

Montgomerie, the eight-time Ryder Cup veteran, had previously said he felt players should only hold the captaincy once.

But the prospect of the 49-year-old taking over from the winning 2012 captain Jose Maria Olazabal is gaining support.

"It will be a great honour," added Montgomerie, who amassed 23½ points in the Ryder Cup and was unbeaten in singles.

"It seemed to be between Darren and Paul and now my name seems to be mentioned an awful lot, so we will see."

Clarke's withdrawal comes after a recent upturn in form encouraged him to think he could make the team for the 2014 competition.

The Northern Irishman said: "I have been to see [Players' Committee chairman] Thomas Bjorn and formally informed him I do not want to be considered for the Ryder Cup captaincy in 2014.

"It was not a spur-of-the-moment decision. I have been agonising over what to do since I showed a few glimpses of my old form in Thailand and Australia at the end of last year."