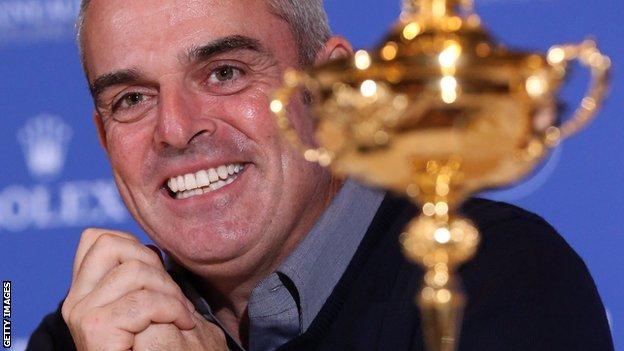 In choosing Paul McGinley, Europe have gone for the man most qualified to do the job.

This is despite a playing record that is modest by the standards of those who have held the position in the modern era.

With only four career victories the diminutive Irishman is dwarfed by those who have gone before and by the achievements of his opposing United States skipper, the eight times major champion Tom Watson.

This was the main concern of those in the committee room who favoured Scot Colin Montgomerie's candidature. But when it comes to Gleneagles next year McGinley's playing record will count for nothing.

Instead it will be his acumen as a leader that will help decide whether Europe record their sixth victory in the last seven matches.

The 46-year-old's qualities in this regard were crucially acknowledged by the continent's top players in the build up to the meeting.

Rory McIlroy, who played under McGinley in the 2009 Seve Trophy, was the most outspoken when he told BBC Sport: "It would be a very disappointing day for European golf if Paul McGinley isn't appointed captain."

The world number one's sentiments were echoed by Luke Donald, Justin Rose and Ian Poulter. All of these players can expect to be on duty in Scotland next year.

By being so vocal ahead of the meeting these stars blew out of the water the notion that McGinley is not a big enough golfing figure to warrant the captaincy.

McGinley played in three Ryder Cups, in 2002, 04 and 06, and was on the winning team in each match. On his debut at The Belfry he famously holed the winning putt to claim his place in the folklore of the biennial match.

Sam Torrance was the Dubliner's captain on that occasion and the Scot's exceptional tactical acumen left a lasting impression. So did the analytical brilliance of Bernhard Langer at Oakland Hills two years later.

These traits were apparent in the way McGinley led Great Britain and Ireland to victories over Continental Europe in 2009 and 2011.

He was imaginative with his pairings and his teams have spoken with one voice to praise his communication and organisational skills. In the media centre he said all the right things without resorting to bland platitudes.

These are all important qualities. A word out of place here or there can have an unsettling effect. Remember Sir Nick Faldo's "sandwich list" gaff at Valhalla in 2008.

That match provided Europe's only defeat this century. It wasn't down to the fact that the skipper allowed his practice pairing to be photographed and tried to explain it away in a typically ham-fisted manner, but it didn't help.

More significant is the fact that Europe's sole defeat of recent times came when they had their biggest name at the helm. On-course achievements are not everything when it comes to identifying a good Ryder Cup captain.

Montgomerie was a winning skipper in 2010 despite losing three of the four sessions in that weather affected match at Celtic Manor. He performed his public relations well and presided over a dramatic victory.

But he was no more special than any of the winning skippers Europe have had during this unprecedented period of success.

Going forward there will be no shortage of candidates for the job and there was no great need to break the unwritten rule that says the captaincy is a one-off gig these days.

There was certainly no requirement to change policy as a reaction to the United States's surprise appointment of Watson at the end of last year.

Deliciously, McGinley taking charge of Europe's defence against the legendary Watson means it will take on a David versus Goliath dimension despite the continent's stellar recent record.

Europe will be happy enough with that scenario - after all the David, like McGinley in team golf, was a proven winner.