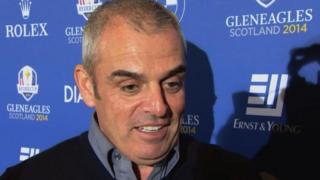 Irish golfer Paul McGinley feels "humbled" by the support he received from Rory McIlroy and other Europe players to be the 2014 Ryder Cup captain.

McGinley, 46, who has played in three Ryder Cups, was vice-captain in 2010 and 2012 and holed the winning putt in 2002, says the backing from his peers landed him the role.

World number one Rory McIlroy, who was present at the announcement, says he is "delighted" McGinley earned the appointment and that it is the "right choice."