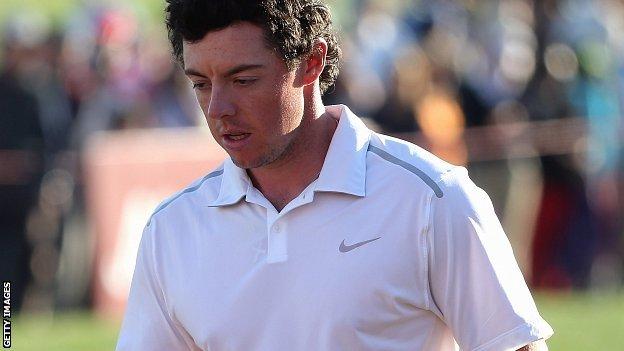 World numbers one and two Rory McIlroy and Tiger Woods missed the cut at the Abu Dhabi Championship, Woods after being penalised two shots.

McIlroy carded a second-round 75 for six over while Woods, who finished one over, missed out by one shot after being given a two-shot penalty.

I'm very disappointed. You never want to get off to a poor start, but I've got to realise it's only the start of the season

Woods wrongly thought he had a free drop at the fifth hole after his ball became entangled in weeds.

He was told on the 11th hole that the matter was being investigated and his bogey five was changed to a triple-bogey seven after discussions with European Tour senior referee Andy McFee.

"Andy feels the way he feels about it and I broke the rules," said Woods.

The American asked Germany's Martin Kaymer, the other member of the star group, to examine the lie among some foliage.

"I called Martin over to verify the ball was embedded. We both agreed, but evidently it was not sand," said Woods.

"It's tough. I didn't get off to a very good start and I fought. I got it back."

Despite changing to his old putter in the week he started playing with Nike clubs, McIlroy departed early from an event in which he was runner-up last year.

"I knew it was going to be a tough week. I hit the ball really well in Dubai last week, but it just got worse for some reason.

"I'm very disappointed. You never want to get off to a poor start, but I've got to realise it's only the start of the season."

The 32-year-old Rose added a 69 to his opening 67 to leave him one ahead of Welshman Jamie Donaldson, Spaniard Gonzalo Fernandez-Castano and Dane Thorbjorn Olesen.

"I felt like my game definitely sharpened up," Rose said. "When you have perfect distance control you know you are swinging it well."