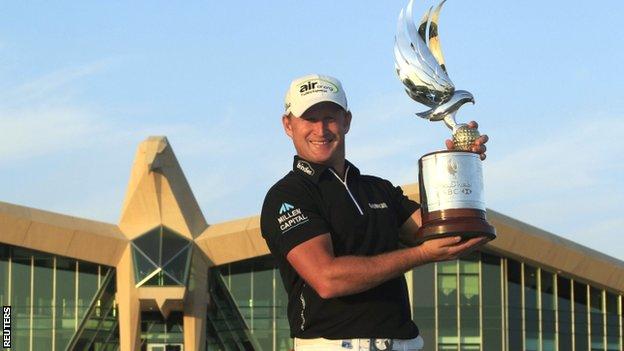 On an enthralling final day at the Abu Dhabi Golf Club, Donaldson had five birdies and did not drop a shot until the final hole, to finish on 14 under.

That allowed Rose a chance to force a play-off but his birdie putt lipped out of the cup and a 71 was one too many.

Denmark's Thorbjorn Olesen had also missed a putt to take the event into a play-off and he shared second.

Having already qualified for the Masters at Augusta in April by breaking into the top 50 by the turn of the year, he required only 14 more events to add his second title with an impressive display in the Middle East, defying a series of contenders, most noticeably world number five Rose.

"It was nerve wracking," he admitted having watched the final pair miss opportunities to take the tournament to extra holes. "I thought one of them would hole if not both. I'm just very happy to be holding the trophy."

Rose had been at the top of the leaderboard from the first day and birdied the second hole on Sunday, but when he missed a par putt from six feet at the fifth and playing partner Olesen collected his second birdie of the round they were tied for the lead at 12 under.

Olesen, 23, who has also qualified for the Masters for the first time, recorded his maiden European victory last season at the Sicilian Open but his hopes of a second title receded when his shot from thick rough at the sixth flew low and left, careered off a rock and finished in a bush, resulting in a double bogey.

The next challenge for Rose came from David Howell, the 37-year-old who moved into the world top 10 after winning the 2006 PGA Championship at Wentworth, but was sidelined by a back injury and has since dropped to 258th.

I didn't do a lot wrong. It's hard to beat yourself up about it.

Howell picked up five birdies in his opening 10 holes and led at 13-under before bogeying the 12th and then suffering a triple bogey seven at the 13th when he took four putts from five feet.

He was to finish five shots adrift in a share of sixth but Donaldson holed consecutive birdie putts of 18 and 15 feet to open a two-shot advantage.

Rose reduced the deficit to one after sinking a five-foot putt for birdie at the 14th but then pushed his approach into the trees at the 16th and was fortunate not to find water, although he dropped a shot when his chip raced past the flag and he could not hole the putt back.

The 32-year-old Englishman missed a 10 foot birdie chance at the 17th but was handed a lifeline when Donaldson took six at the last, an errant drive into rough down the left forcing a lay-up and an indifferent pitch resulting in three putts from the edge of the large, undulating green.

Olesen did not threaten the hole with his 15 foot putt on the final green but Rose's effort from slightly nearer was on line, only to spin out on the right hand edge to crown Donaldson the champion.

"It reminded me exactly of the putt at 18 against Phil, just outside right edge," said Rose, referring to his memorable Ryder Cup victory over American Phil Mickelson at Medina in September. "That's exactly where I hit it and unfortunately this time the putt didn't go in for me.

"When I birdied 14 I didn't realise Jamie had had a hot round. I had actually expected to be one ahead at that point and I was one behind, so every credit to Jamie.

"I didn't do a lot wrong. It's hard to beat yourself up about it."