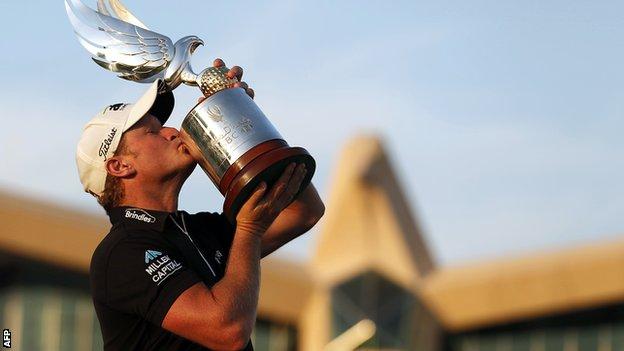 Jamie Donaldson admits he still has a lot to learn and is targeting more Major championship appearances after his victory in Abu Dhabi.

The Welshman overhauled Justin Rose's two-stroke lead to win by one shot at the Abu Dhabi Championship and pocket more than £280,000 in prize money.

The triumph was the 37-year-old's second on the European Tour following victory at last season's Irish Open.

Donaldson has already qualified for the Masters at Augusta in April by breaking into the World's top 50.

He hopes the victory in Abu Dhabi will help his career and lead to further appearances at major championships.

"I haven't played many Majors, I need to play a lot more and compete to win," added the Pontypridd-born golfer.

"It's a long season ahead and it's like a big learning curve.

"My game's got better over the last five years and this is me I suppose getting better again.

Donaldson had five birdies and did not drop a shot until the final hole, to finish on 14 under in Abu Dhabi and secure a win which will boost his world ranking.

"It was an important week to play well this week with the field that I was playing in. I played great all week," Donaldson added.

"Obviously World rankings points is massive and you're going to shoot up the world rankings.

"I didn't have high expectations - the best finish I've had here is 11th before so to win is great."