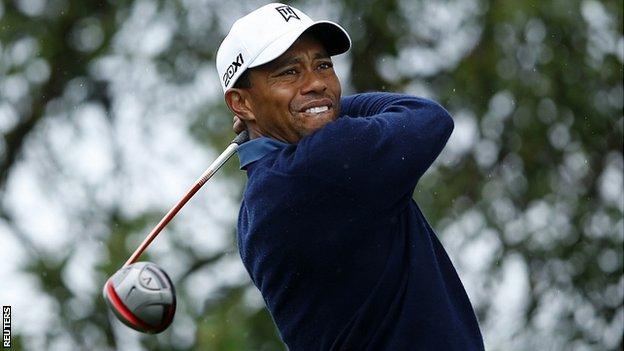 Tiger Woods fired a seven-under 65 to lead by two shots at halfway in the Farmers Insurance Open in California.

The world number two resumed three behind overnight leaders Brandt Snedeker and KJ Choi but shot four birdies and an eagle in his opening 11 holes on Torrey Pines' north course.

The 14-time major champion reached 11 under to head Billy Horschel (69).

"If I can do it there, I can do it out here. Even though last week I played only two days, I felt like I hit the ball well enough to shoot a better score than I did. I had a couple of days to work on it, and I came out here and felt pretty good about it."

Woods has gone on to win 34 times out of 44 when holding at least a share of the 36-hole lead on the PGA Tour, though he has triumphed only twice from that position in his last six attempts.

The 37-year-old won his last major title, the 2008 US Open, at Torrey Pines and is a six-time winner of the Farmers Insurance Open at the venue.

Woods, who ended a lengthy barren run on the PGA Tour with three victories last year, is nine under par for the eight par-fives so far this week, and said: "That's basically where the round could be had.

"On the north course, drive the ball well here and you're going to probably have four-iron shots into the par-fives. We just happened to have the wind turn into us on nine, so I ended up hitting five-wood.

"But you sprinkle that in with probably four or five wedge shots in there, a round of six or seven under par is definitely conceivable."

England's Ross Fisher leaked two late bogeys to drop to seven under, while Ryder Cup stars Phil Mickelson and Nicolas Colsaerts and Scot Martin Laird were among those who scraped through right on the cut line of one under.