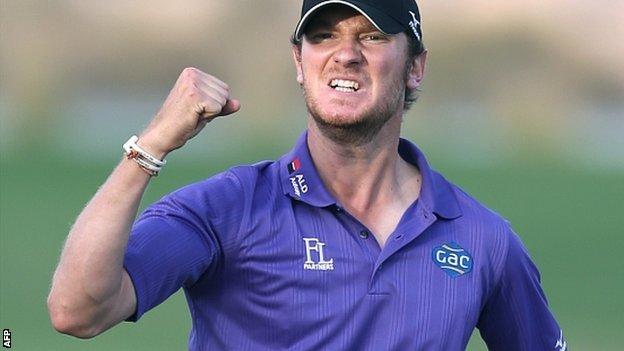 England's Chris Wood clinched his first European Tour title with an eagle on the final hole at the Qatar Masters.

Wood started the last round in Doha with a three-shot lead but trailed South Africa's George Coetzee and Spain's Sergio Garcia by one after 17.

There's an enormous weight lifted off my shoulders

Coetzee closed with a seven-under 65, while Garcia's 66 kept the pressure on.

However, 25-year-old Wood followed a big drive on the par-five 18th with a five-iron to 12 feet and kept his nerve to sink the putt to win by one shot.

"It's a dream come true," said the Bristolian after his three-under-par 69 took him to 18 under.

"There's an enormous weight lifted off my shoulders. I feel like I can go on and win more.

"I knew it was going to be hard no matter how I played - winning on the European Tour is not easy."

Wood, who was fifth in the 2008 Open as an amateur and then third a year later at Turnberry, made a shaky start with a double-bogey five on the par-three third.

He recovered one of those shots on the fifth, immediately dropped another on the sixth but atoned with birdies on the eighth and ninth to turn in level par.

A solitary back-nine birdie on the 14th kept his nose in front but Coetzee and Garcia both picked up two shots in the last three holes, forcing Wood, who has recorded 19 top-10 finishes in his career prior to this victory, into holing his eagle at the last.

"That putt on the last hole was the first time I'd looked at the leaderboard. I knew that was my chance and I took it," said Wood.

"I had to dig deep. You've seen the likes of Tiger Wood do it before - he wins ugly. I didn't play as well as I have done but in the back of my mind I always felt I was there, or thereabouts.

"I grew up watching Garcia. To beat him by a shot on the last was pretty satisfying. The field we get in these desert events is great so there's a lot of world ranking points there for me."

Although it is his first European Tour success, Wood did capture the Thailand Open last August.

England's Steve Webster closed with a couple of birdies to finish joint fourth on 13 under after a four-under 68.

Fellow Englishmen Anthony Wall and Simon Khan finished a shot further back, while Andy Sullivan knocked in nine birdies in his closing 65 to jump into the top 10.