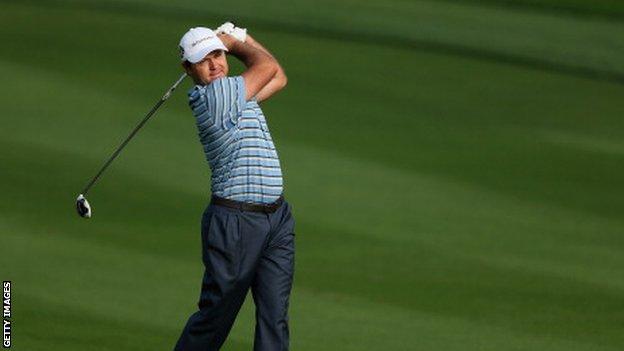 Richard Sterne holds a one-shot lead at the Dubai Desert Classic after shooting a 10-under-par 62 in round one.

The South African had no bogeys on his card as he recorded his lowest round on the European Tour, although he missed Ernie Els' course record by one shot.

Scotland's Stephen Gallacher holed two eagles in his 63 to be one shot back.

Scottish duo Scott Jamieson and Chris Doak, and England's Tommy Fleetwood are seven under, one clear of Paul Casey, while Lee Westwood is on five under.

On a low-scoring day, Westwood's 67 was only good enough for a share of 12th with nine other players on a congested leaderboard.

The Englishman, who has relocated to Florida with his family to prepare for the season, said: "You never know what to expect after a few weeks off and I played nicely.

"There are a few new clubs in the bag and they all behaved. I felt very sharp - no rust there at all and I probably played better than I finished off last year."

Leader Sterne started on the 10th and was six under after his first nine holes and rolled in a further four birdies on the back nine to make a mockery of the letter sent out by tournament director Mike Stewart in advance of the event warning the players about the condition of the greens.

"Obviously when they send out something like that you do tend to worry, but generally I think they are better than we expected," said Sterne.

"I knew Ernie had shot 61 quite a while ago (19 years ago) and always thought it would be impossible to get close, but I got as close as you could."

Casey, who had much of 2012 disrupted after dislocating his shoulder while snowboarding, also started strongly with a 66 and had nothing but praise for the greens.

"I scratch my head slightly - they are absolutely pure," he said. "I have no idea what [Stewart] was talking about. It's the best-conditioned golf course I've played this year by far. The guys are going to go bananas when you have a course as good as this."

Casey, who three-putted the last, added: "I'm not particularly happy about that but I played beautifully and the key to that was the driver. It's something I've been struggling with, so I am ecstatic about that."