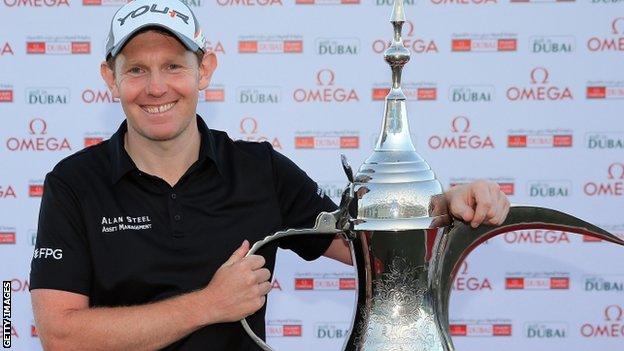 If anything, feels just a little bit sweeter than my Dunhill Links victory at St Andrews in 2004.

To win once on the Tour these days is fantastic; to win twice is just unbelievable!

Especially given the competitive nature of the Tour; the heat was on in more ways than one in Dubai.

It was the first time I had taken a lead into the final round. You not only have to play well to win but you also require a slice of Lady Luck.

Given the windy conditions, I thought that shooting under par would make it difficult for those trying to catch me.

I didn't get off to a great start. However, it wasn't until I looked at the scoreboard at the 11th hole that I realised I was level with Richard Sterne and we were four shots clear.

I knew after that it was down to matchplay between the South African and myself: luckily I came out on top!

The reaction from the ex-pats in Dubai was amazing; there were also some familiar faces in the crowd with a couple of members from my home course Kingsfield having flown out on the Friday.

Back home, I was aware of the level of support and would like to thank everyone who sent good luck messages and congratulations on Sunday.

Even the new Scotland boss Gordon Strachan took time out to send a message.

It was terrific to sit in the Pittodrie stand on Wednesday along with my wife Helen and son Jack cheering his Scotland team onto their first win since he took over the reins.

There has been little time for celebrations as it was back on the range just 24 hours after landing back in Scotland.

The Dubai victory means the next stop is Arizona to play in the WGC matchplay. I hope the weather in the States is much better there as it was a blizzard when I picked the kids up from school on Monday afternoon!

This is a different type of tournament, with only the top 64 players in the world rankings taking part.

While it will be great being on the range beside Woods, McIlroy and Co, there will also be the familiar faces of Paul Lawrie and Richie Ramsay competing.

All being well after that, it may be the Doral in Florida two weeks later. The World tournaments are the ones you want to be playing in.

By playing in these events you really can propel yourself up the world rankings.

So far, so good. I always had faith I was able to play at this level.

I've been working really hard over the past three years and if it means hitting an extra fairway during a round or taking one putt off your score, then the long hours of hitting balls will be worth it.

It's likely to be a fairly long year with some huge events now pencilled in during October and November.

But for now it's back off to the chipping area to make sure my short game is in order!

Do you have any questions for Stephen? Use the form provided to ask him about life on the Tour.