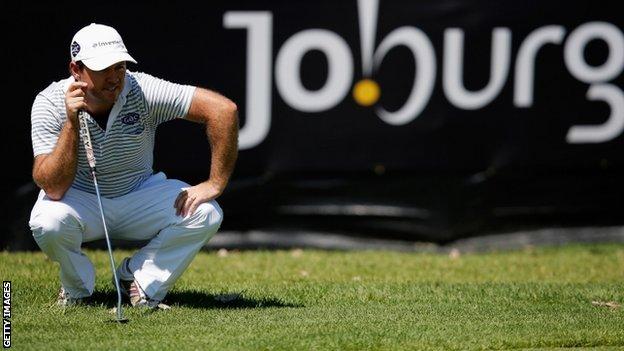 South African Richard Sterne finished seven shots ahead of Charl Schwartzel to claim a tournament record victory on 27 under at the Johannesburg Open.

Sterne, who finished second behind Stephen Gallacher in Dubai last week, shot a final-round 64 for a final total of 260 at the European Tour event.

The 31-year-old's victory takes him to the top of the Race to Dubai money list, above Scotland's Scott Jamieson.

The victory is Sterne's first on the European Tour for four years.

The South African missed most of the 2010 and 2011 seasons with a form of arthritis in his back.

Trevor Fisher Jr shared the overnight lead but Sterne, once ranked 28 in the world before eventually slipping out of the top 1000, hit five birdies before the turn to lead by five strokes at that stage.

Sterne, who also had three birdies on the back nine, will climb back into the top 60 when the new world rankings are announced on Monday.

"I would like to get back into all the Majors - that's where I want to be playing.

"It is a big year. I have got off to such a nice start so hopefully I can keep it going."

Scotland's David Drysdale was the best-placed British golfer, tied for 11th after dropping a costly shot on 16 having opened up with five birdie on the front nine.

Tommy Fleetwood, from Southport, was tied 13th on 15-under after his closing 69 saw him finish on 272.

Latest leading places in the European Tour Race to Dubai