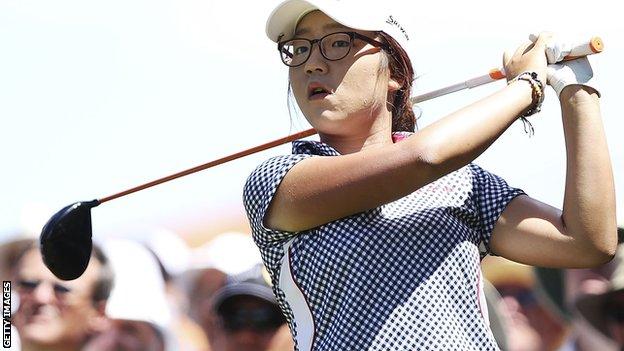 New Zealander Ko, who shot a 63 in her opening round, went into the final day tied with Shin on 17 under but a three-over 76 left her four shots behind.

A one-under round of 72 was enough for Shin as world number one Yani Tseng's seven-under 66 left her two behind.

"Third in a professional event is a pretty good result and I can't say I'm not fully pleased," said Ko.

"I had a few struggles with my drives but I can't play good every single round."

South Korea-born Ko added: "I've got a couple of years until I turn pro so I guess within that period hopefully I'll be able to get a little bit better.

"I always think putting is the biggest part of the game and also the psychology part, so those are the two things I would like to build up."

Ko, winner of the New Zealand Women's Open recently, got off to a bad start at the Royal Canberra Golf Club on Sunday as the amateur double-bogeyed the first hole and a five at the par-four second left her further behind.

Birdies followed at four and five for Ko but three more bogeys meant Shin was not troubled by one of the brightest prospects in golf.

In January 2012, Ko became the youngest player, male or female, to win a professional event with her victory at the New South Wales Open and was the youngest winner on the LPGA Tour when she was victorious at the Canadian Open.

Shin had started the day with a birdie but bogeys on five and 12 gave others in the field hope before the South Korean birdied 14 and 15 to ensure victory.

Chinese Taipei's Tseng did get over a bogey on the first to put herself in contention with three straight birdies before an eagle on the sixth and a further three birdies on the turn but it was not enough.