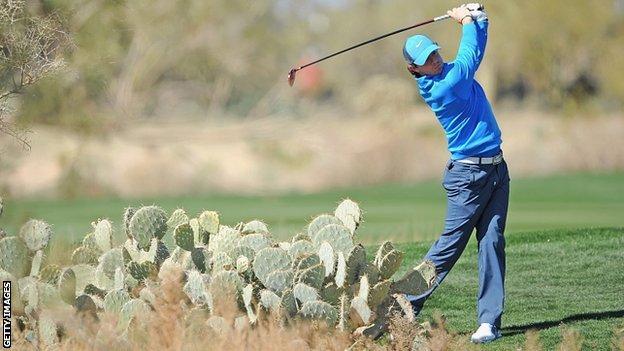 As the sun peeps over the cactus-clad Arizona mountains it is easy to understand why the dawn drive from Phoenix to the outskirts of Tucson is a favourite journey of the golfing year.

The spectacular views are accompanied by the knowledge that the week's competition will be just as enticing. Head-to-head combat refreshingly replaces the usual diet of 72-hole strokeplay.

This is why the WGC Match Play Championship is the most eagerly anticipated event in the first period of the calendar.

It's the first time all of the world's best get together and each knows their visit could be short-lived if they are not on their mettle from the opening hole.

There is no easing your way into this event. "If you need that putt to stay in the match, it's basically like a putt to win a tournament," said world number one Rory McIlroy.

"You have to make it. To have that feeling on the first day is nice."

With the withdrawals of Brandt Snedeker (sore ribs) and Phil Mickelson (family holiday), the lowest-ranked player in the field is 64th seed Shane Lowry. The Irishman's reward for his Match Play debut is a clash with his old friend McIlroy.

Lowry will tee off knowing that an upset is not beyond the realms of possibility. Last year, 15 of the 32 first-round matches were won by the lower-ranked player, including defending champion Luke Donald falling to Ernie Els.

"The difference in level between number one and 64 in the world isn't big at all," McIlroy told BBC Sport. "Compare that to something like tennis where it's much more different.

"I guess it will be tough playing a friend because you are close, but I think for that one match you have just got to put it out of your head and just compete and try your best to win."

It was McIlroy who bought the champagne after Lowry won the Irish Open as an amateur in 2009. They now share the same Dublin-based management company.

"We've known each other a long time since we were teenagers," McIlroy said. "We have played in a lot of Irish boys teams together and won the European Team Championship together and I was there when he won the Irish Open.

"So we've had a good relationship and we are good friends and will remain so after this match."

Lowry is a two-time winner on the European Tour and is relishing the prospect of taking on the world's top player. "It's huge for me. It's going to be one of the biggest days in my career so far if I can beat him," he told BBC Sport.

"Obviously, there's not many people expecting me to win so I've got nothing to lose. I'll be giving it 100%, trying to do the right things at the right time."

In truth, though, fantastic matches abound on the opening day of this tournament. Even the forecast rain and possible snow shouldn't dampen what is always one of the great golfing days of the year.

Other clashes to look out for include Ian Poulter against Scotland's Stephen Gallacher, defending champion Hunter Mahan versus Matteo Manassero, Luke Donald against Marcel Siem and Tiger Woods against Charles Howell III.

Gallacher is one of three Scots in the field, along with Paul Lawrie and Richie Ramsay. In all, there are a dozen representatives from the United Kingdom with Donald and Poulter having triumphed in two of the last three finals.

McIlroy was beaten in the title decider in 2012, while Justin Rose may be the man to watch this time despite a tough-looking draw.

"I've never done particularly well here," admitted Rose, who reached the quarter-finals in 2007. "It's a great tournament to get going deep into the field.

"You turn up on the Saturday and it's almost an eerie feeling. The car park gets very quiet, there's not many lads on the range. You feel like you are getting down to business. It'll be nice to experience that this year."

To survive the hectic first day is the initial objective and to become the week's last man standing is the ultimate ambition.