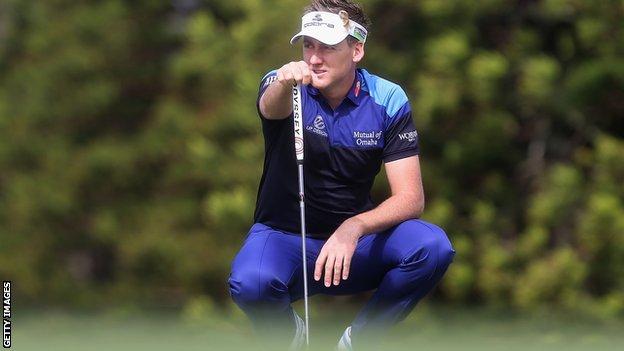 The move was announced last November in response to the increased use of belly and broom-handle putters.

"It will be a shame if they get overridden and the PGA Tour go out on their own," Poulter told BBC Sport.

He continued: "There is going to be lots of disconnect between tournaments."

Long putters: for and against

"You've got some guys who have been using this style of putter for almost 20 years so it's a little bit of a scary position that they're in," - Keegan Bradley

"To change something that drastic, it needs to be based on facts and not what certain people think the tradition of the game looks like," - Webb Simpson

"We swing all 13 other clubs. I think the putter should be the same," - Tiger Woods

"The fact is, if somebody invented the belly putter tomorrow, it would not pass. There's no way they would let it through," - Padraig Harrington

Golf's governing bodies, the R and A and USGA, announced the proposed changes last year.

A 90-day consultation period for views on the rule changes to be expressed expires at the end of this month. The PGA Tour's Policy Board met at the beginning of the week and it is believed considerable opposition was voiced.

If the Tour decides not to adopt the new rules, which are due to be introduced in 2016, the implications for the running of the game could be far reaching.

Poulter said: "There's going to be disconnect between the PGA Tour and the governing bodies and it just makes it very, very messy."

The US based PGA Tour runs the lucrative American circuit and plays a dominant role in staging World Golf Championships events. Traditionally they adopt the rules of golf as determined by the R and A and USGA.

Those two governing bodies run the Open Championship and US Open respectively. The PGA of America, who organise the PGA Championship and American Ryder Cup team, have also expressed reservations about the proposed rule change.

It is clear there is potential for schisms to develop among the leading golfing bodies and on the putting issue there is considerable discontent among PGA Tour players.

"The rhetoric among the players is the highest it's ever been," Tour Policy Advisory Council member Joe Ogilvie told the Golf Channel.

"The question is why are we governed by an amateur organisation? I praise what the R&A and USGA have done over the years. They have been wonderful stewards of the game, but is this the best way?"

Poulter, meanwhile, has offered ardent support for the rule change. "They thought long and hard about that decision," he said.

"It took the guys a number of years to come up with the potential rule change and I think we should respect that and abide by it.

"I'm a short-stick putter but the guys who have got the long stick are going to want to hold out as long as possible.

"It is going to cause a lot of friction and I guess we are going to have to wait and see."

World number three Luke Donald has been another vocal supporter of the proposed ban on anchor techniques where players lodge extended putters into pivot points on their bodies.

But the Englishman sounded a diplomatic tone when news of potential PGA Tour opposition became apparent.

He told BBC Sport: "I am in favour of it but I also have sympathy for the guys.

"I'm in favour from a purely selfish stand point. I putt very well with a short putter. If people are improving by using a long putter and then that advantage is taken away from them that's only going to benefit me.

"In other regards I understand their point about disagreeing with the rule. The fact is that they (long putters) have been around for a number of years and statistics don't show they are gaining a big advantage so I understand both sides.

"It seems like its going to come to the boil very soon. It's going to be interesting."