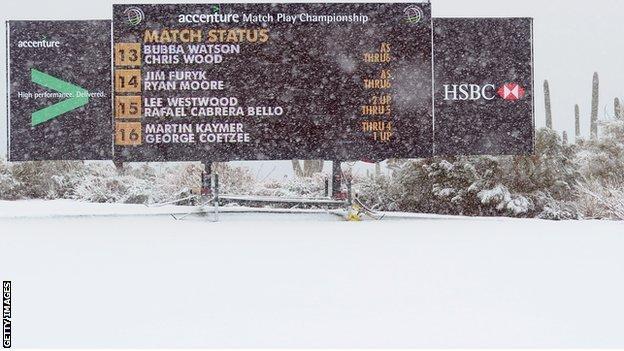 None of Wednesday's matches were completed and 11 games did not tee off by the time play was suspended.

Englishman Ian Poulter said on Twitter: "What's the problem? Let's play. The caddies have just had a snowball fight. Never seen anything like it."

Poulter, who won the tournament in 2010, was three up against Stephen Gallacher and Lee Westwood was two up against Rafael Cabrera Bello when a snow storm caused suspension of play after just four hours.

High temperatures in Tucson, Arizona are forecasted to fluctuate between 11C and 19C between Thursday and Sunday with little chance of rain.

In February, the area has an average low of 7C and high of 21C.

Frost is forecast for each remaining morning, although the weather is predicted to improve. Officials said the first round uld resume, weather-permitting, from 08:30 local (15:30 GMT) on Thursday with the second round scheduled to start from about noon.

McIlroy, who along with Tiger Woods and Luke Donald had not teed off yet, added: "This is unbelievable. Everyone knows it snowed here a couple of years ago but it was nothing like this.

"There are three or four inches on the putting green - It's ridiculous."

Jason Day, who was six up against Zach Johnson after 10 holes, said: "I have never actually played golf to the point where we have stopped for snow, which is kind of crazy.

"It is a little crazy for it to snow in the desert, as well. But that's just how it is. Mother Nature can just do whatever she wants. I was playing out there with four layers on.

"You could see from a distance that it was coming in. When those big snowflakes started to fall, there was no chance."

Although the tournament takes place in the desert, cooler weather at high altitude is not uncommon, and this is the second time in three years that wintry weather had forced a delay in play at Dove Mountain.

In 2011, almost an inch of snow covered the course with Donald going on to take victory once the snow had thawed out.