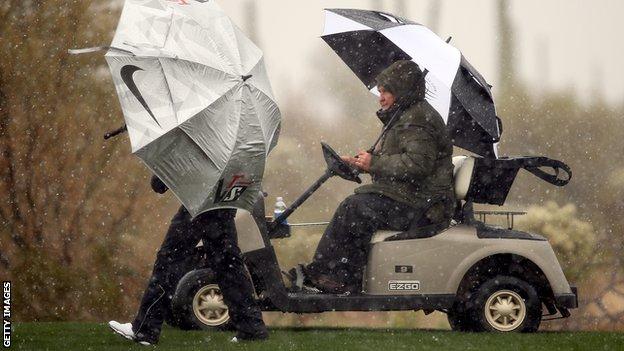 The opening day of the WGC Match Play Championship has been halted by heavy snow at Dove Mountain in Arizona.

None of Wednesday's matches were completed by the time play was suspended after thick snow settled quickly on the course.

Play was called off before Rory McIlroy could tee off against Shane Lowry.

McIlroy said: "this is unbelievable. Everyone knows it snowed here a couple of years ago but it was nothing like this."

"There are three or four inches on the putting green. It's ridiculous and it doesn't look like we'll have any more play."

Graeme McDowell was another frustrated spectator as he did not get the opportunity to tee off against Padraig Harrington before play was suspended for the day.

Englishman Ian Poulter was three up against Stephen Gallacher and Lee Westwood was two up against Rafael Cabrera Bello when played was stopped.