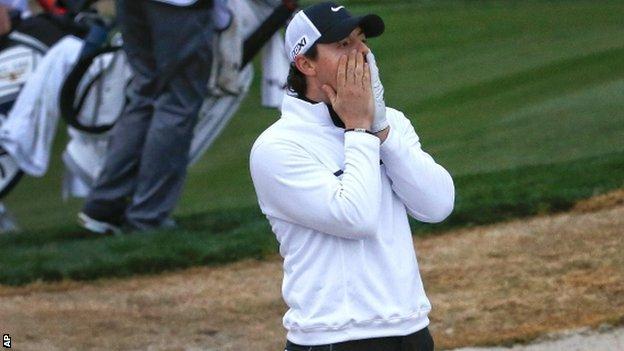 Rory McIlroy's bad start to 2013 continued as the world number one lost out in the opening round of the WGC Match Play in Arizona.

McIlroy lost on the final green to fellow Irishman Shane Lowry to become the third top seed in the last four years to exit in the first round.

Tiger Woods and Lee Westwood were also knocked out on Thursday.

Woods lost 2&1 to Charles Howell III, while Westwood was beaten by Rafael Cabrera Bello of Spain.

with play delayed until 13:00 local time on Thursday.

McIlroy changed club and ball suppliers at the start of this year in a lucrative deal but has struggled for form since, missing the cut in his opening event of the year in Abu Dhabi last month.

And McIlroy knows he has plenty of work to do after his defeat to a player ranked 68 in the world who secured victory with a dramatic final three-foot putt.

"I drove really well, but couldn't take advantage of that," McIlroy said. "If I'd hit my irons better it could have been a different story.

"I could have been three or four up early on, but let him get back into the match and he had a nice little run."

Lowry, meanwhile said: "My knees were knocking over that final putt.

"I was very nervous going out and quite mad at myself for that, but I had a bit of luck that I needed and said to my caddie that he's not going to be liking this at all."

Howell, who was competing at the tournament for the first time in four years, made a 25-foot birdie at the 16th to take control of his match against Woods

"I had nothing to lose," said Howell, who started the year outside the top 100 in the world and hasn't qualified for this World Golf Championship in five years. "In this format, match play is crazy. He's Tiger Woods. I was lucky to hang in there."

The final matches were played in near darkness, and they could have stopped after 15 holes. Woods wanted to play on, even though Howell had the momentum. Woods was two under for the day, and neither of them made a bogey.

"We both played well," Woods said. "He made a couple of more birdies than I did. He played well, and he's advancing."

Westwood, who had led by three holes after nine, lost at the first extra hole to Cabrera Bello but there were wins for Ian Poulter, Justin Rose and Luke Donald.

First-round results (US unless stated):