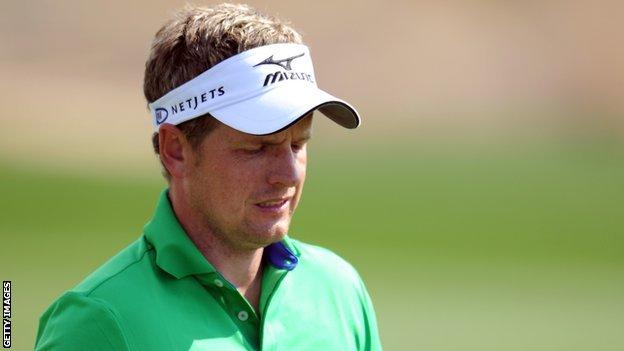 Luke Donald became the latest high-profile scalp at the WGC Match Play in Arizona as the third seed was comprehensively beaten by Scott Piercy.

But he lost 7&6 to world number 37 Piercy who went to the turn six under par having sunk a four-iron for an eagle two at the fifth.

Masters champion Bubba Watson is the only top-10 seed remaining.

"Scott played very well, I played just very average," Donald said. "I need to drive it well around this course. There's a few forced carries out there and probably I didn't drive it well enough to put any pressure on Scott.

"But he was seven under through 12 and just playing extremely solid. I had a few opportunities on the greens, but for whatever reason I was just not making the putts and hence I'm going home."

Fifth seed Justin Rose is also out after losing 3&2 to Ryder Cup colleague Nicolas Colsaerts, who will next face Amercian Matt Kuchar.

Ian Poulter, who won the event three years ago, advanced after an impressive 3&1 success over Bo Van Pelt.

The Englishman is playing in his first event for six weeks but is clearly in good form after following up his victory over Scotland's Stephen Gallacher in the opening round.

"It feels pretty good," Poulter said. "It was always a little risky taking that amount of time off, but it's working out pretty well.

"I worked hard at home, put some new irons in the bag and I couldn't be any fresher or fitter than I am right now.

"I didn't make any silly mistakes and I guess making seven birdies you are going to be tough to beat."

He will meet Northern Ireland's Graeme McDowell in round three, who came through his tie against another Swede, Alexander Noren.

Two rounds are scheduled to take place on Saturday to make up for lost time caused by freak snowstorms that delayed the start of the competition.

Second-round results (US unless stated):