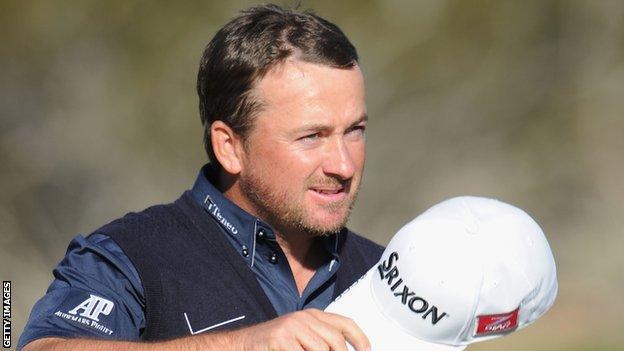 Graeme McDowell will face an all-Irish clash against Shane Lowry in the WGC Match Play in Arizona after beating Alex Noren at the second extra hole.

McDowell was one down as he stood on the 18th tee but fired in an approach to four feet for a closing birdie.

Noren strayed into the desert on the second extra hole and McDowell secured his passage into the third round.

Having beaten Padraig Harrington in the opening round, Lowry could be his second Irish scalp.

"It was a really tough, high quality match with Alex, so I am really pleased to have come through it," said McDowell.

"My match with Shane is going to be another tough one but a lot of fun, and no matter what the result we will still be good mates afterwards."

Lowry, who knocked out world number one McIlroy, beat Swede Carl Pettersson 6&5 to become the first number 64 seed to reach the last 16.

The Irishman is only playing because Phil Mickelson and Brandt Snedeker did not take up their places.

Two rounds are scheduled to take place on Saturday to make up for lost time caused by freak snowstorms that delayed the start of the competition.

Second-round results (US unless stated):