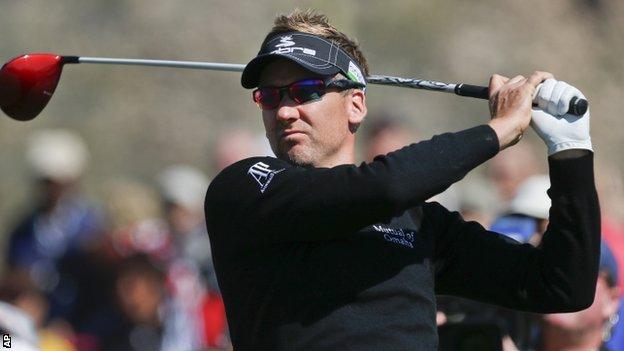 Ian Poulter reached the semi-finals of the WGC Match Play in Arizona thanks to two wins on Saturday.

He then followed it up with a 3&2 success over Steve Stricker to set up a meeting with defending champion Hunter Mahan in the last four.

The other semi-final features a clash between Australia's Jason Day and American Matt Kuchar.

But it was Poulter who shone, making five birdies and an eagle at the par-five eighth to leave Stricker with little chance.

"My record in matchplay is very, very good and I'm just very comfortable going toe-to-toe with somebody," Poulter said afterwards.

"I'm playing for myself this week. I really enjoy the fun of matchplay. As good as my record is in Ryder Cup, in some way it doesn't translate into playing just for yourself.

McDowell had beaten world number one Rory McIlroy's conqueror Shane Lowry in the last 16 but he failed to find any fluency throughout the day.

Although he managed two birdies in the first three holes against Day, he paid the price for some small errors and a bogey five at the 17th ended his hopes of a semi-final spot with Day making a two-putt to advance.

Defending champion Mahan, who edged out Webb Simpson one-up, earned his win with a birdie three on the 16th and sealed victory with a par on the penultimate green.

He is relishing the chance to take on Poulter for a place in the final.

"I have so much respect for the guy and how he plays," Mahan said. "To me, his determination and his will is his greatest strength. He's never going to think he's out of a hole."