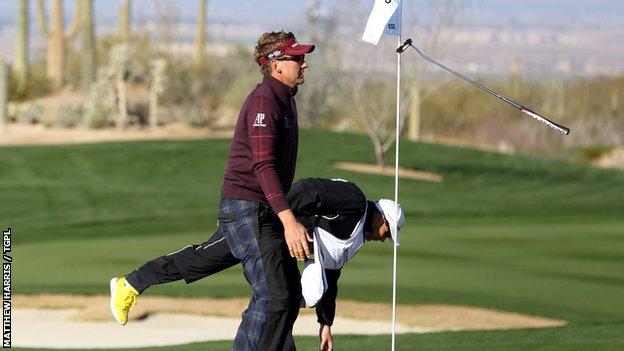 Matt Kuchar won the WGC Match Play title as England's Ian Poulter moved back into the world's top 10 with a fourth-place finish in Arizona.

Poulter lost to Jason Day in the third-place play-off after suffering a heavy semi-final defeat against Hunter Mahan earlier on Sunday.

But defending champion Mahan could not retain his title as Kuchar won 2&1 in the final in Tucson.

Australia's Day beat Poulter, who won the event in 2010, by one hole.

Mahan maintained his record of never having been behind in a match since the opening round last year as he beat Poulter in the last four.

But that run came to an abrupt end in the final as Kuchar edged one up on the fourth. Mahan bogeyed the par four and then dropped shots on the next three holes as Kuchar established a commanding four-hole lead at the turn.

Mahan produced a stirring comeback to reduce Kuchar's advantage to just one hole, before he found trouble on the 17th to hand victory to his fellow American.

Poulter claimed the scalps of Stephen Gallacher, Bo van Pelt, Tim Clark and Steve Stricker to reach the last four, but struggled against Mahan on a clear, cold day at Dove Mountain.

And he looked short of his best when he returned to the course for the play-off match against Day.

Much is made of the number of surprise results the Match Play throws up but that is because the seedings are determined by results from strokeplay events. This final was contested between two top exponents in the head to head form of the game. Kuchar was a quarter and semi-finalist in the last two years and Mahan was defending the title he won 12 months ago. He also needed to beat Ian Poulter, another Match Play expert, in the last four. Kuchar coped best with the strong and bitterly cold wind to claim his first World Golf Championships title.

However, his performances during the snow-affected event were still enough to move him into the world's top 10 for the first time in 25 months.

Mahan, who beat Rory McIlroy in last year's final, went two up with a deft chip to two feet to set up a birdie on the long eighth.

Poulter went further behind on the short 12th after Mahan chipped in from about 50 feet for a birdie to go three up with six to go.

The Englishman gave himself hope with a spectacular bunker shot for a birdie on the par-five 13th, but Mahan was on in two and with two putts remained three up.

World number 13 Poulter missed the fairway and green and failed to hole from five feet on the 14th to go four down, and a half in birdie threes at the 15th sealed his demise.