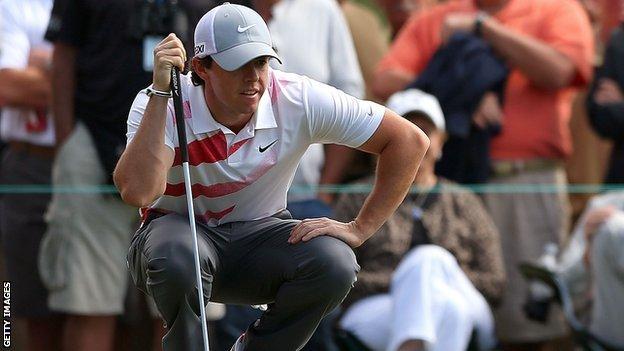 Rory McIlroy's slow start to the year continued as he began the defence of his Honda Classic crown in Florida.

The world number one from Northern Ireland carded a level-par 70 to finish the first round six shots off the pace.

Tiger Woods, runner-up to McIlroy last year, also had to settle for a 70 on a testing Palm Beach course.

Northern Ireland's McIlroy has struggled this year to rediscover the form that has elevated him to the top of the world rankings.

He came into this tournament following last week's first-round exit at the WGC Match Play to the Republic of Ireland's Shane Lowry.

McIlroy, 23, made a steady start, parring each of his first five holes, but dropped a shot at the par-four sixth.

He recovered at the ninth but followed a birdie on the 14th with a bogey on the last.

"[It] wasn't the nicest way to finish [but] I saw enough pretty good golf out there to be positive going into the next few days," he said.

Woods described his opening round in south Florida as "boring" but the 14-time major winner did cause a splash when he found the water at the par-four sixth.

He took off his shoes and put on a pair of waterproof trousers before retrieving the ball from the creek with a nine-iron.