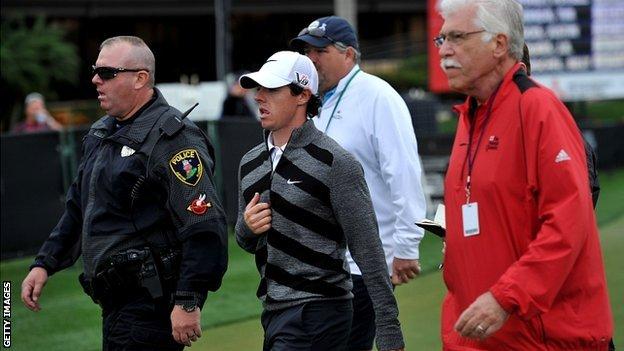 World number one Rory McIlroy walked off the course after completing just eight holes of his second round at the Honda Classic in Florida.

The defending champion withdrew after hitting his second shot into the water on the 18th - his ninth - and slumping to seven over par for the day.

As he left, McIlroy told journalists he was not in a good frame of mind.

McIlroy now has 14 days to provide PGA Tour Commissioner Tim Finchem with written evidence to support his claim that he was hampered by a troublesome wisdom tooth. Players are not allowed to walk out on tournaments unless they have suffered an injury, other disability or serious personal emergency. If one of these criteria is not satisfied the golfer would be liable to a fine or ban, but it is hard to envisage the Tour wanting to suspend McIlroy in this instance.

He later released a statement citing a painful wisdom tooth as the reason behind his withdrawal.

"I have been suffering with a sore wisdom tooth, which is due to come out in the near future," he said.

"It was very painful again this morning, and I was simply unable to concentrate. It was really bothering me and had begun to affect my playing partners.

"I came here with every intention of defending my Honda Classic title. Even though my results haven't revealed it, I really felt like I was turning a corner."

BBC Sport's Iain Carter, who is at Palm Beach Gardens, said McIlroy briefly spoke to journalists as he left the car park.

"At the ninth he picked up his ball, shook hands with his playing partners and went straight to the car park, driving off saying in his only comment that he is not in a good place mentally," said Carter.

The rules of golf state that players are not allowed to stop playing unless there is a threat of lightning or "some other good reason such as sudden illness".

The 23-year-old now has 14 days to provide PGA Tour Commissioner Tim Finchem with written evidence to support his claim that he was hampered by a troublesome tooth. If the PGA is not satisfied then McIlroy could face a fine or ban.

McIlroy changed club and ball suppliers at the start of 2013 in a lucrative deal but has struggled for form since, missing the cut in his first tournament of the year in Abu Dhabi and then losing his opening match at the WGC Match Play.

The Northern Irishman carded a level-par round of 70 at Palm Beach Gardens on Thursday, and asked afterwards about his new clubs had said: "It's hard to commit to the shot that you need to play every time.

"I felt like I hit the ball OK, not as good as I can, but it's getting there."

However, he made a terrible start to Friday's second round with a triple bogey, a double bogey and two bogeys in his first eight holes.

McIlroy managed to find the fairway with his tee shot on the 18th, but his approach landed in the water and the 23-year-old called it a day.