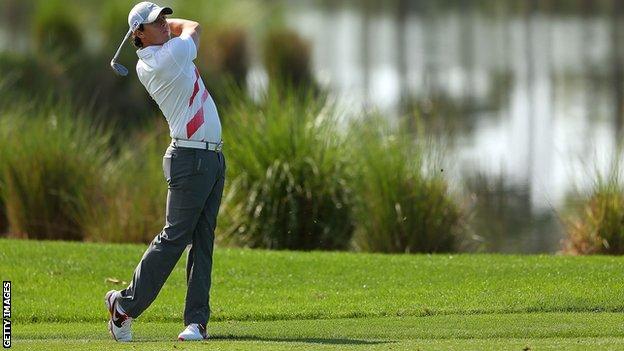 Rory McIlroy is facing the toughest week of his career. He has to perform on and off the golf course to turn around a season that currently appears to be in freefall.

Ever since his walk-out at the Honda Classic last Friday he has been portrayed in headlines as having a career in meltdown, crisis and disgrace.

He is the hot topic of conversation, not only in media centres and newsrooms but throughout the global sporting firmament.

The overriding question is "What is going on?" When it is put to him this week at the WGC event in Doral, he has to be as dexterous in word as he hopes to be with his clubs.

This week he needs to be as open as possible in explaining the events at PGA National. He has to take and answer all the questions coming his way

Before we go any further we should acknowledge that his career is not, in fact, in meltdown. The world number one and reigning PGA Champion has lost form and in three tournaments this season hasn't found it with his new clubs.

Crisis? Well it's a relative term and there are plenty who'd be happy enough dealing with McIlroy's current circumstances.

And disgrace? Well, he made a mistake. It wasn't good and he will, no doubt, take warranted criticism on the chin.

But still he has explaining to do. That's why his pre-tournament press conference ahead of the Miami tournament is very important.

The chronology of his comments after the walk off was not clever. "I'm not in a good place mentally" and repeated denials of any fitness concerns were followed by a statement citing toothache for an inability to concentrate.

Mixed messages don't work in the modern media age. "It can get out of hand," Tiger Woods noted in the wake of McIlroy's troubles.

The Woods answer is to say nothing and issue a statement later. "You've just got to think about it a little more before you say something or do something," he said.

That's not McIlroy's style and it is one of the elements of his make-up that makes him such an engaging personality.

In my experience he treats the media with respect and honesty. They are refreshing qualities and not easy to sustain when you are of his rarefied sporting status.

Having been a child prodigy he has lived his whole life in a spotlight he has largely enjoyed.

When he was an amateur playing the 2007 Open Championship, his then manager Chubby Chandler was in the process of lining up media training to coincide with McIlroy turning pro.

Honda Classic: Walked off during second round citing toothache

So adept was the then 17-year-old at dealing with the myriad microphones and notebooks being thrust in his direction at Carnoustie, Chandler swiftly realised it would be a waste of time.

But media relations has never been a more challenging area for top sportsmen and women. Giving your best to an unforgiving eye desperate to unearth something newsworthy can be all-consuming and exhausting without proper management.

Woods has always held the media at arm's length. It has bred resentment on both sides. He has only statutory time for us and precious little respect. In turn, he has few friends in reporting circles.

"Most of the people who are commentating or analysing don't understand the game of golf," Woods said last week.

He is right. Few could know the game like the 14-time major champion does. Perhaps only Jack Nicklaus, who says of McIlroy: "He's probably not playing his best, and he also has a set of golf clubs that he's having trouble getting used to, and one sort of plays off the other.

"When Augusta rolls around, he'll be fine."

But the type of understanding Woods alludes to isn't our job. Whether in print, TV, radio or online our role is to present the stories, enhance the background and hold to account those who need to be.

Woods knows that too and his guarded nature is entirely understandable. He wants to be able to concentrate on his life with the minimum of distraction.

This has to be McIlroy's quest too. And it's not easy when you are more inclined to be open and engaging.

Add to that a superstar girlfriend, extraordinary talent as well as record breaking achievements and squillions already tucked away in the bank.

Woods will do his press conferences and the odd TV interview and say very little of interest. It is what works for him.

The 23-year-old McIlroy must be tempted to go down a similar route but that would go against the grain of his character.

And this week he needs to be as open as possible in explaining the events at PGA National. He has to take and answer all the questions coming his way.

Woods tried to stage manage his re-entry from a 2009 scandal that was a genuine meltdown and crisis, and it didn't work.

McIlroy's malaise is only comparable in the sense that he occupies the same golfing goldfish bowl. As a consequence he has to answer that central question of what is going on.

It will be posed in many different ways by the media in all their guises.

Once it is answered there might be the chance of a peace that could allow what he most needs; for his clubs to be doing the talking.