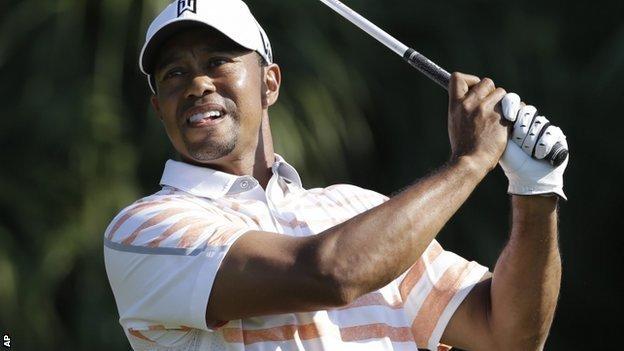 Tiger Woods moved into a two-shot lead over Northern Ireland's Graeme McDowell after the second round of the World Golf Championships tournament at Doral.

The world number two holed his 17th birdie of the event - a career best over two rounds - in a seven-under 65.

McDowell finished on a neat 67 to head into the weekend as the American's closest rival while world number one Rory McIlroy is 11 shots off the lead.

"It looks like Tiger has got the eye in round here," commented McDowell.

"I saw Phil (Mickelson) on the board and the possibility of the dream pairing of Phil and Tiger tomorrow, and I said to my caddie, 'Let's try and spoil that party'.

"If I can be hanging around come Sunday afternoon on the back nine and give myself a chance, that would be nice."

Mickelson and fellow American Steve Stricker remain in the hunt on 10 under while reigning US Masters champion Bubba Watson and Swede Freddie Jacobson are a single shot further back.

England's Ian Poulter was nestled among a pack on six under on the Blue Monster course with Justin Rose two strokes behind.

It was another up-and-down day for McIlroy as the Northern Irishman mixed six birdies with three bogeys. The round of 69 was his best of a testing season so far.

"It's nice to shoot something in the 60s," he said. "[I] definitely [have] something to build on over the next couple of days.