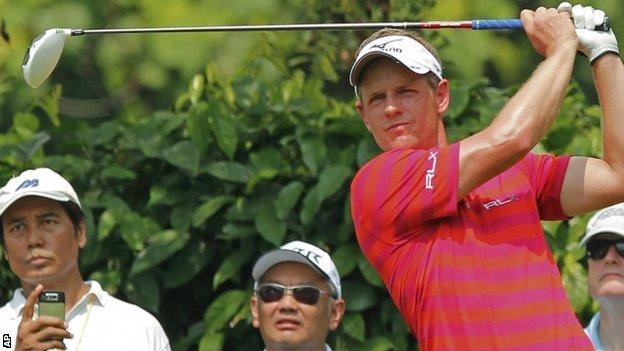 England's Luke Donald carded a two-over 74 before round one of the Malaysian Open was halted by a thunderstorm.

Thailand's Kiradech Aphibarnrat leads on seven under after signing for a 65 but around half of the 156-strong field are yet to finish their opening rounds.

Scotland's Scott Jamieson is the best-placed Briton, having eagled the 10th to go to six under but play was then halted and he must finish on Friday.

English trio David Howell, Mark Foster and Oliver Fisher are on three under.

World number three Donald, who arrived in Malaysia on Tuesday after finishing fourth in the defence of his Tampa Bay Championship, refused to blame the 12-hour time difference and jet lag for his indifferent round.

He started on the 10th and bogeyed the 11th, 12th and 13th holes as he reached the turn three over. A chip-in birdie on the first - his 10th - was quickly wiped out on the next when Donald chipped into a greenside bunker and signed for a double-bogey six.

However, a couple of six-foot birdie putts on the fifth and ninth holes saw him finish the round positively.

"I slept pretty well the last two nights and felt pretty good. It was just a case of not being quite on it," said the 35-year-old.

"It was one of those frustrating rounds where I got very little momentum. I got off to a slow start - three over after four - and was just hanging on after that. There's a lot of trouble out there and I found too much of it."

Italy's Edoardo Molinari, Denmark's Anders Hansen and France's Gregory Bourdy all opened with six-under rounds of 66 to sit one shot off the pace.

The monsoon rains and thunder and lightning followed a swelteringly hot day that had already seen two players retire ill.