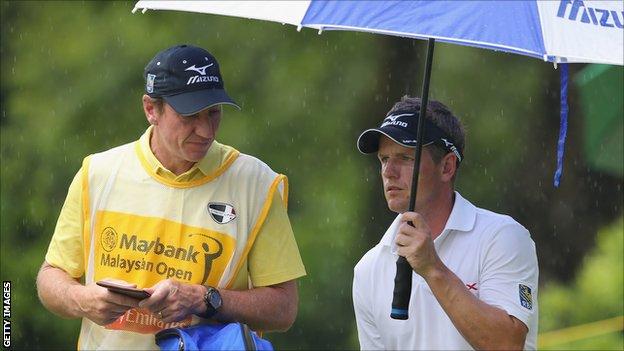 The Malaysian Open was again hit by torrential rain with half of the field unable to complete their second rounds.

Overnight leader Kiradech Aphibarnrat played just nine holes but birdied his last to stay ahead on 10 under par.

South Africa's pre-tournament favourite Charl Schwartzel (68) and China's Ashun Wu, who sunk five birdies in his four-under-par 68, are on nine under.

Scotland's Scott Jamieson (72) and England's Lee Slattery (70) are the best-placed Britons on six under par.

World number three Luke Donald, who needed a major improvement on his opening 74 to make the cut, picked up a couple of birdies in the seven holes he managed to play before darkness descended on the course.

The Englishman is back to level par for the tournament, 10 shots off the lead.

Schwartzel, who finished off his first round with a chip-in birdie for a five-under 67, started his second 18 in equally good form with birdies on the 10th and 11th.

Two more birdies on the 17th and 18th completed a bogey-free first nine for the 2011 Masters champion and when two more followed on the third and fifth, Schwartzel was leading on 11 under.

However, he a wayward approach to the sixth cost him a shot and a second bogey followed on the seventh after he found a greenside bunker and failed to get up and down.

"I can't be too hard on myself because it's extraordinarily hot out there," said Schwartzel.

"I lost a bit of concentration towards the end and made bad decisions on the sixth and seventh - poor club selections. I was in the middle of the fairway both times and made bogey. I hit a very poor shot on the seventh."

Wu drew level with a 12-foot birdie putt on the last and the pair looked set to share the overnight lead set the pace until Aphibarnrat birdied the last to complete his opening nine in three under par.

Scotland's Alastair Forsyth - winner of the event in 2002 - mixed two bogeys with four birdies in his two-under-par 70 to move to five under.

Round one of the Malaysian Open was also disrupted when a thunderstorm struck the area.