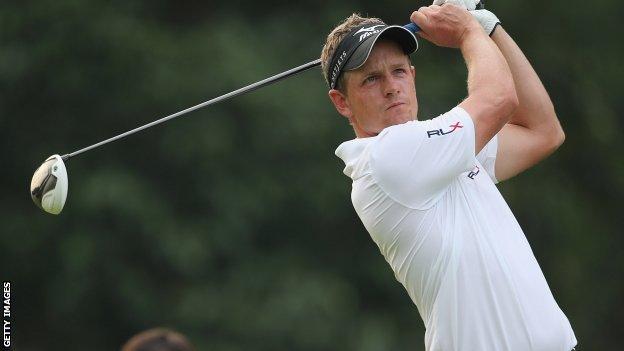 Luke Donald has missed his first halfway cut in a regular European Tour event as storms caused the Malaysian Open to be reduced to 54 holes.

The world number three completed his second round on Saturday but his one-over-par 73 left him on three over.

Thailand's Kiradech Aphibarnrat leads on 11 under, one clear of South Africa's Charl Schwartzel.

However, England's Donald has already turned his attentions to the Masters which starts at Augusta on Thursday, 11 April.

"I've got a couple of weeks off to get ready for [the first major of the season at] Augusta and I'll obviously be very diligent in my preparation," said the 35-year-old.

"I would have loved to go back home in form, but in golf you just never know. We've seen it many times before when people go into tournaments with very little form and win, including majors, so you just have to keep plugging away and hope it's your turn."

Donald had briefly got back to level par in his second round, after a two-over 74 in his opening round, but a double-bogey seven on the par-five 10th on Saturday ended his hopes of making the cut.

"The greens here are very different from what I play on," he continued. "They are a little slower and I just didn't adjust or adapt to them."

After completing their second rounds, Aphibarnrat and playing partner Charl Schwartzel pressed on, holing birdies on the first hole of the third round.

However, Aphibarnrat dropped a shot after driving into the rough at the second as Schwartzel saved par from a greenside bunker on the second.

The pair were unable to complete the third hole though - the sirens sounded to indicate an approaching thunderstorm just before Schwartzel was about to play his third shot on the par-five hole.

Seven players, including Irish pair Padraig Harrington and Peter Lawrie, are one shot further back on nine under, while Scotland's Alastair Forsyth is the best-placed British player on eight under after picking up three shots in the opening eight holes of his third and final round.