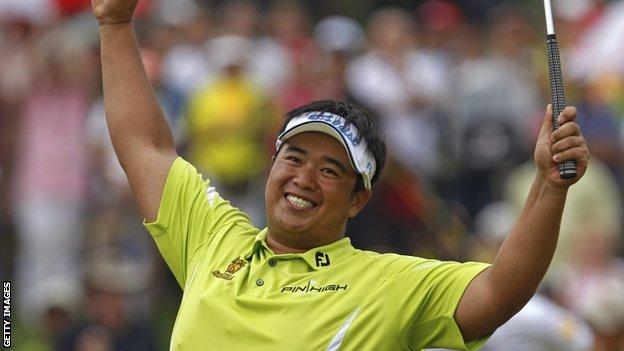 Thailand's Kiradech Aphibarnrat held his nerve to win his first European Tour title with a one-shot victory in a rain-reduced 54-hole Malaysian Open.

Aphibarnrat led by one from clubhouse leader Edoardo Molinari as he prepared to tee off on the 16th but a thunderstorm forced a two-hour delay.

However, when play resumed, the 23-year-old hit his tee shot on the par-three 16th to three feet for a birdie.

A par-bogey finish saw him close with a two-under-par 70 for a 13 under total.

"This means a lot to me," Aphibarnrat said. "I had been struggling a lot after getting sick with my thyroid, but I fought and worked hard with my dad and my coach.

"During the suspension, I couldn't eat anything. I was so excited. When I walked out, everything was shaking, even my voice.

"My caddie told me to just concentrate, 'just two more holes'. I'm lucky that I played only 54 holes. Otherwise, I am so tired due to the weather and the golf course."

The tournament had been reduced to three rounds after thunderstorms disrupted play on each of the first three days so it was inevitable that the final 18 holes would also be delayed.

Aphibarnrat, who had played the first two holes of this third round on Saturday before play was suspended, opened with a birdie on the third and an eagle on the par-five fifth.

Ireland's Padraig Harrington kept in touch with three birdies and an eagle on the front nine, however the three-time major winner bogeyed the 12th, 13th and 14th holes to fade to joint sixth on nine under.

Aphibarnrat dropped shots on the seventh and 12th and was joined at the top of the leaderboard by Wu Ashun but the Chinese was also unable to sustain his challenge, double-bogeying the 16th after shanking a pitch into the crowd.

Molinari set the target at 12 under after a bogey-free five-under par closing 67 but Aphibarnrat moved one ahead of that with a birdie on the 14th.

A regulation par on 15 was followed by the two-hour storm delay but the former junior world champion appeared untroubled on the resumption.

After the birdie on 16, he saved par on the 17th meaning he had the luxury of a bogey-six on the par-five 18th to complete the win.

Denmark's Anders Hansen (66) was third on 11 under, with France's Victor Dubuisson (70) and South African Charl Schwartzel (71) joint fourth a shot further back.

Englishmen Mark Foster (69) and David Howell (70) were the leading British players, alongside Harrington on nine under.