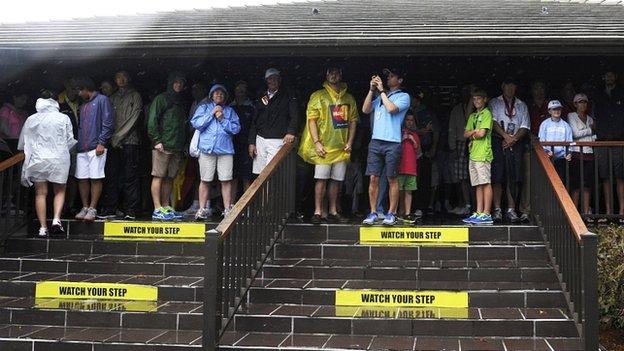 Tiger Woods will have a three-shot lead when play resumes on Monday at the Arnold Palmer Invitational after Sunday's play was curtailed by storms.

The 14-time Major winner had begun his final round with a birdie on the second when the players were forced off.

Fellow Americans Rickie Fowler and Keegan Bradley are part of a four-strong group tied for second.

England's Justin Rose but dropped further off the pace with an opening-hole bogey before the weather intervened.

Rose's compatriot Lee Westwood was one of those to complete their final rounds before the conditions intervened, ending well out of contention as a 75 took him to five over par overall.

Sergio Garcia had an eventful round, chipping back onto the fairway from a lie 15 foot up in the branches of an oak tree on the 10th before withdrawing from the tournament two holes later on five over for the day.

The Spaniard had earlier carded a nine at the par-five sixth.

The ferocity of the storm brought down several tree branches and caused a 30-minute power cut, before play was suspended at 20:05 GMT with heavy rain and high winds still in the area. Play is due to restart at 14:00 GMT on Monday.