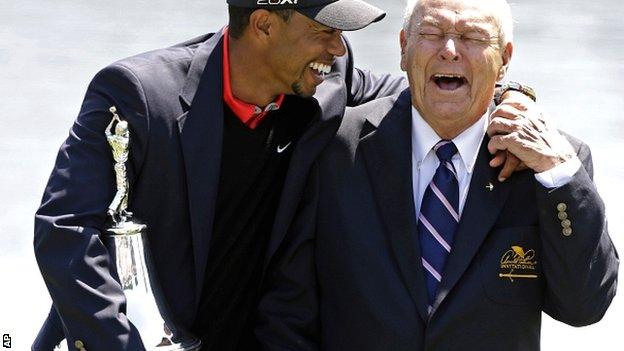 Tiger Woods returned to the top of the world rankings for the first time since October 2010 after winning the Arnold Palmer Invitational by two strokes.

The 37-year-old replaces Rory McIlroy as number one after dropping to a career-low 58th in November 2011.

"The fox is back in the hen house as far as I'm concerned. He struts about and even when he's not firing on all cylinders they crumble and fall away. He does seem to have an amazing effect on them and it'll be interesting to see what happens in the rest of the season."

Woods resumed three shots clear after storms halted Sunday's play and shot 70 to hold off England's Justin Rose, who climbed to third in the world rankings.

"I'm very pleased with the way I'm playing," said Woods, who became number one for the 11th time following his eighth professional win at Bay Hill..

"It was a by-product of hard work, patience and getting back to playing golf tournaments.

"I've turned some of the weaknesses that I had last year into strengths. I'm really excited about the rest of this year."

Woods has now claimed six titles from his last 20 starts on the PGA Tour. After wins at Doral and Torrey Pines this year, he is now clear favourite to capture his fifth Masters title when the season's opening major begins at Augusta on 11 April.

Woods, who clinched the last of his 14 majors in 2008, first became world number one in June 1997 following his maiden major victory at the Masters, aged 21.

But a five-month lay-off in late 2009 after an infamous scandal in his private life, a string of injuries, including four knee operations and an Achilles problem, and problems getting to grips with a new swing all contributed to his fall down the rankings.

October 2010: Drops to second behind Lee Westwood in world rankings after a combined 623 weeks at the top

March 2013: Back at number one for the 11th time, replacing Rory McIlroy

Woods had played two holes of his final round at Bay Hill when a torrential storm ended proceedings in Florida on Sunday.

But the ferocious storm that felled several trees at the exclusive Orlando course was replaced by sunshine and only a moderate breeze on Monday.

American Rickie Fowler moved to within two shots of Woods with four holes remaining but dropped four strokes in the next two holes, including a triple-bogey eight at the 16th, when he put two shots into the water.

Woods, who leaked several tee shots to the right, was in the large fairway bunker at the 16th, from where he found the water on Friday, but struck a majestic escape into the heart of the green and calmly two-putted for a birdie.

Rose, who was at the top of the leaderboard in the first two rounds before dropping back with a 72 on Saturday, resumed four shots adrift with 16 holes of his final round remaining.

He dropped a shot at his first hole of the day and at the third, but recorded four birdies, ensuring sole possession of second with an assured up-and-down from the greenside bunker at the par-three 17th.

Northern Ireland's McIlroy did not play at Bay Hill but can regain top spot by winning this week's Houston Open, which Woods is not playing in.