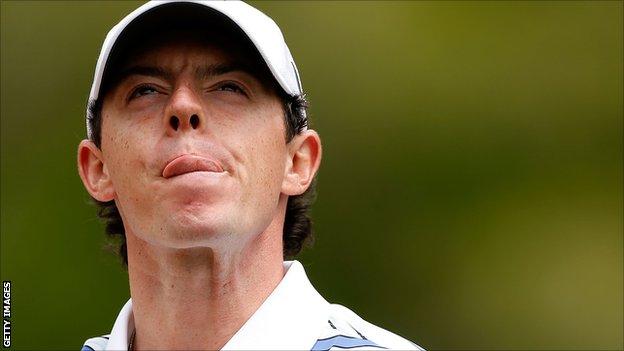 Rory McIlroy's bid to reclaim the world number one ranking from Tiger Woods got off to a faltering start as he shot a one-over par 73 at the Houston Open.

Northern Irishman McIlroy, who was surpassed by Woods earlier in the week, trails leader DA Points, who hit eight under using his mother's putter.

The 36-year-old American resorted to using the putter after missing seven cuts in nine events this year.

Needing a victory in the Texas event to leapfrog Woods, McIlroy's round got off to a poor start as a double-bogey seven at the eighth left him three over for his front nine.

I feel really good with the putter, and I believe that as the tournament goes on, I'll get better

"I felt like on the front nine I was a little tentative and I made a couple of silly mistakes, making double [bogey] on the par-five, so I just went down and tried to commit to my shots more on the back nine and it seemed to help," said the 23-year-old, who is playing in his final tournament before next month's Masters - the first major of the season.

McIlroy, who hit three further bogeys - tempered by four birdies - added: "There were still a couple of loose shots here and there but it was a tricky day and if I could have got it back to even par I would've been pretty happy.

"Hopefully conditions are a little calmer [on Friday] morning and I can go out there and make some birdies."

Points began his tournament with five successive birdies after starting his round at the 10th, and added another before the turn.

Three more followed on a front nine marred only by a bogey at the fifth.

On using his mum's putter, which he used when he first turned professional, Points said: "It's just a really good-looking putter and I brought it with me this week because I just had been putting so bad.

"I thought maybe I'll pull this old putter out of the garage and maybe it will have some magic in it. Sure enough, it did."

Phil Mickelson was at four under and right in contention until he hit his tee shot into the water at the sixth hole (his 15th) and made double bogey. The American nearly hooked a three-wood into the hazard at the next and three-putted for bogey. He then made bogey on the par-three ninth from a bunker to wind up at 72.

"It was a disappointing finish," Mickelson said. "I feel really good with the putter, and I believe that as the tournament goes on, I'll get better."

Mickelson played with defending champion Hunter Mahan, who struggled to a disappointing 74.

Also in the group was Geoff Ogilvy, who needs to finish in the world's top 50 to secure his place at Augusta. The Australian, who is currently ranked 50th, had three penalty shots in his round of 73.