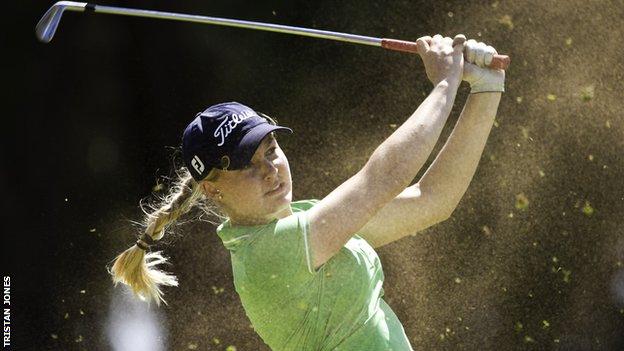 Hull, 17, shot a level-par 71 to finish on 11 under, three shots behind Ariya Jutanugarn of Thailand, who began the day trailing her by one stroke.

England's Melissa Reid and Laura Davies were tied for eighth on five under after respective rounds of 69 and 71.

Hull, from Kettering, and Jutanugarn graduated from tour school in Morocco together in December, and are regarded as two of the world's most promising young golfers.

Jutanugarn, 17, had led at the halfway stage but fell behind on Saturday before carding a final round of 67.

She carded birdies on the opening three holes with another following at the seventh.

A bogey on the ninth was the only blot on the front nine but even a double-bogey at the par-five 15th could not deter her from collecting her first win.

Jutanugarn said: "I played very well on the front nine. At the par-five, it got really exciting because there was only a one-shot lead."