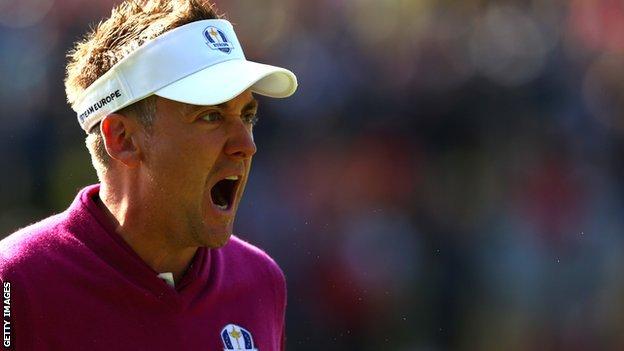 Jeremy Clarkson doesn't like golf. Which is a shame, because Ian Poulter would make a perfect Star in a Reasonably Priced Car.

A petrol head, with several Ferraris, a Ford GT and a Rolls Royce in the garage, and a competitive instinct bordering on the maniacal, who wouldn't want to see those Ryder Cup eyes thundering through the Hammerhead?

The Englishman would love to be unleashed around the Top Gear track, he's just never been invited. Clarkson, the ball's in your court. Maybe a Green Jacket would help.

Ian Poulter at the Masters

Poulter, in case you'd forgotten or were visiting the moon, was one of the inspirational figures behind Europe's remarkable Ryder Cup victory at Medinah last year.

Eyes bulging, fists pumping, chest puffed - a reincarnation of the great Seve Ballesteros - Poulter won all four of his matches and helped spearhead Europe's resurgence. Playing with Rory McIlroy on Saturday afternoon, he birdied his last five holes for victory to give Europe a glimmer of hope at 10-6 down going into Sunday's singles.

On that tumultuous final day in Chicago, Europe won the first five matches out and ended up 14½-13½ winners in one of the great sporting comebacks.

Team-mate Lee Westwood came up with a great line afterwards about how the next team would feature nine automatic spots, two wildcard picks and Poulter. "It's the 'Poults' clause," joked Westwood.

"It's unbelievably flattering for someone to say that," says Poulter, speaking from his home in Florida the day after a quick dash to New York to spec out his latest toy, a Ferrari F12 (in Grigio Silverstone Matte, since you ask).

"What's been said over the months after the Ryder Cup has been overwhelming. Personal messages and conversations with people, significant people in the game of golf - I'm not going to name names - have meant an awful lot.

"I'll take them with me wherever I go because when you've been given that kind of respect from people who are respected in the game to a very high level, you're very honoured.

"Captain Jose Maria Olazabal said some very private, personal things to me which were very moving. He's an emotional guy anyway, and we had a short conversation on the evening after it all went down and subsequently I've received messages from him. I've got to be honest, it's been unbelievably touching."

The Masters in numbers

14 - Career top-10s by Phil Mickelson in 20 appearances, including three victories

39 - Countries that have had players compete in the Masters

47 - Players who have won the Masters

Through his Ryder Cup exploits - he was the top-scorer on either side at Valhalla in 2008 and a key figure again in 2010 - it's fair to say the 37-year-old Poulter's stock has rocketed, certainly since his early days on tour, when he was perhaps known more for his colourful outfits and often outspoken comments.

"There's been a very big, I wouldn't say tide change, but I've certainly noticed a difference in the States," said Poulter, a Hitchin native now settled in the exclusive Lake Nona enclave with wife Katie and four kids.

But, rightly or wrongly, it's majors that define careers. And you sense Poulter might not feature in many people's final shortlist for any given major, like perhaps countrymen Westwood or Luke Donald might.

However, he's been close a few times, including second at the Open in 2008 and third in the US PGA last year. And with Medinah on the mind, it's a fair bet plenty of people would pick him to sink some crucial putts coming down the stretch if the title was on the line.

Poulter discussed with his management team after the Ryder Cup how to channel that inspiration into his individual tournaments. He says the experience "added to his archive" from which to draw on, and he went on to clinch the WGC HSBC Champions event a couple of months later for his second PGA Tour title.

He admitted at the end of the year, though, he should have won more than his current tally of 16 worldwide titles, but concedes it is not easy to reproduce "Ryder Cup Poults" for 72 holes of strokeplay.

"A major tournament is a very selfish feeling, a Ryder Cup is a very sharing feeling, so you feel more pressure and more excitement to deliver because you have to," said Poulter.

"Yes, you get a lot of satisfaction out of an individual victory but when you're competing for that many people it just means that much more. That's why it's so hard to replicate the adrenaline and rushes you get in a Ryder Cup in strokeplay. It's just very hard to have that feeling on the Thursday of Augusta.

"You don't get that electricity from the crowd on the first hole of a major if you hole a 15ft birdie putt. You get a round of applause and it's nice, but in the Ryder Cup the whole crowd goes bananas so you get more passionate and motivated to deliver.

"It's an amazing stage to perform on. You're absolutely transfixed - the adrenaline, electricity and everything going on around you makes you perform very, very well.

At Augusta, Poulter has enjoyed two top-10s in the last three years, including seventh 12 months ago, and says he is very comfortable there, despite its exacting demands.

"I drive it pretty straight and I like moving the ball and shot-making from the fairway and you have to do that on a number of holes to get at certain pin locations," he said.

"You have to have a decent short game and my scrambling numbers have been pretty good the last few years. And I putt pretty well on fast greens, so there's a lot of Augusta I love for the right reasons."

He also likes Masters week for the time he gets to spend with his family, mum and dad, Uncle Phil and a couple of friends from back home, in a large house they rent with their own chef 10 minutes from the course.

"We've stayed in the same house for about five or six years," he said. "It's got a little lake out the front, and every day we get back from the course we take the kids out there and throw the rods out and do some fishing. It's kind of cool, and it's a nice relaxed week. We enjoy it an awful lot."

So, can Poulter allow his mind to wander and dream of winning a Green Jacket, or even what he would have on his Champions Dinner menu?

"We all dream, don't we," he said. "I'm a never say never guy. I think every golfer that has ever played the game has envisaged holing that putt on the 18th to slip a Green Jacket on.

"It's the same as the days when you work in the pro shop, you're on the putting green and imagine holing a putt to lift the Claret Jug. Everybody talks about it and wishes one day they can be in the position Bubba was last year.

"But I haven't spared one minute of thought on that [Champions Dinner]. You've got 11 months to weigh that one up. Let's try to get our hands on a jacket first."