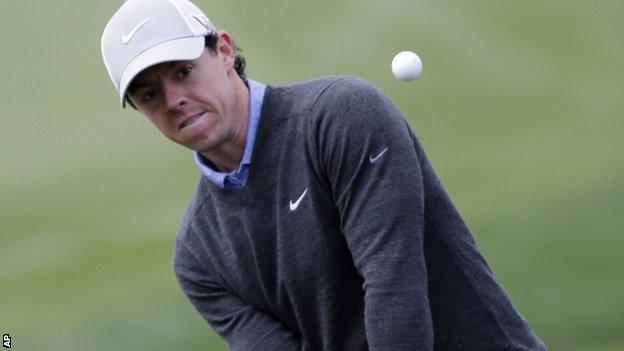 Rory McIlroy's hopes of playing himself into form before next week's Masters got off to a stuttering start with a level-par 72 at the Texas Open.

McIlroy only decided to play in the event after making his first cut of the season at last week's Houston Open.

McIlroy was two under after eight holes but three successive bogeys checked his decent start in San Antonio.

Ireland's Padraig Harrington is one shot behind the overnight leaders Bettencourt and Tomasulo.

The triple major winner had five birdies and one dropped shot in his round of 68 and shares second with United States trio Billy Horschel, Harris English and Bryce Molder.

England's Brian Davis and Scotland's Martin Laird both putted six birdies. But three bogeys blighted Davis' round as he started with a three-under 69, while Laird had four bogeys in his 70.

England's Ian Poulter also carded a two-under 70, his round including three birdies and a bogey at the par-four fifth.

However, all eyes were on McIlroy, who won five tournaments last year, including his second major at the US PGA Championship, but has struggled in 2013.

He postponed a scheduled trip to Haiti in his role as a Unicef ambassador and entered the Texas Open 30 minutes before the deadline with caddie JP Fitzgerald advising that he needed more competitive rounds under his belt.

McIlroy began his round on the 10th and opened steadily with four pars before birdies on the 14th and 17th lifted him to two under.

Bogeys on the 18th, first and second saw him slide down the leaderboard before successive birdies on the third and fourth stopped the rot.

A bogey on the ninth, his last, saw the Northern Irishman finish the day where he started it, on level par.

McIlroy says that a piece of bad luck midway through the round caused him to lose his focus, but that he was pleased he was able to recover quickly from the setback.

He said: "I guess I felt like I hit a good shot into the 18th, and it came back into the water. Then I think that sort of got to me and that's why I bogeyed the first and hit a bad shot at the second.

"It's just about limiting those mistakes - it's definitely more mental than it is physical."

Looking ahead to Friday's second round, he said: "I'll just go out and try to shoot a good number and get myself in position for the weekend."