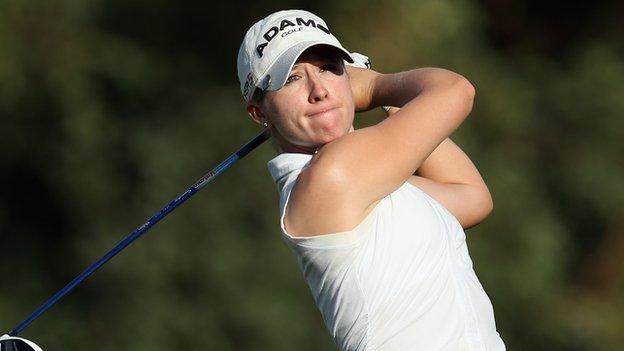 Northallerton-born Jodi Ewart started her professional career on the Syemtra Tour, and earned her LPGA card for the 2011 season after tying for 33rd at the LPGA Final Qualifying Tournament.

She recorded two top-10 finishes in 2012 with a tied seventh at the Kia Classic and a tied ninth at the Sybase Match Play Championship.

Ewart Shadoff hit six birdies and two bogeys in the her opening round at the season's first major, which takes place at Mission Hills in California.

"I've been playing really consistently in the last three or four tournaments," said the Yorkshire-based player..

"I knew my game is right there, and I knew I was due to have a really good round."

Ewart Shadoff took the outright lead with four holes to play after four consecutive birdies starting at the par-five 11th, but dropped a stroke with her second bogey of the day at the 16th.