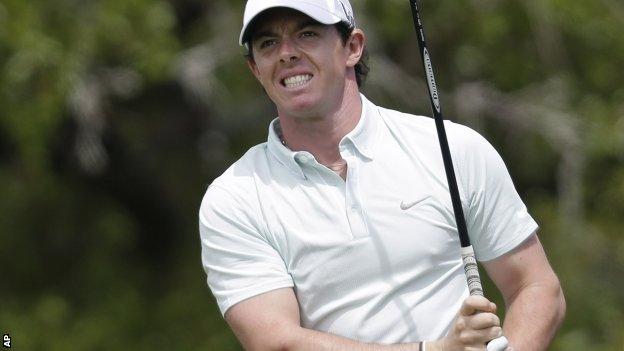 Northern Ireland's Rory McIlroy carded three closing birdies as he climbed the leaderboard at the Texas Open with a five-under-par 67 in the second round.

The world number two only elected to compete in the event at the last minute in an effort to play himself into form for next week's Masters at Augusta.

Having begun with a 72, McIlroy posted seven birdies in all to reach the halfway stage three shots off the pace.

American Billy Horschel leads by two at eight under after recording a 68.

Horschel bogeyed two of his first four holes but erased those dropped shots with three successive birdies from the fifth.

He then birdied the 14th before picking up two more shots on the 17th and 18th to lead after two rounds.

I haven't really been in contention this year, so it will be nice to get into the mix

McIlroy had three birdies and two bogeys in his first nine holes as he reached the turn one under for his round and the tournament, and he improved his score to two under with a birdie on the 11th.

A run of four pars followed before his blistering finish catapulted him up the leaderboard.

The 23-year-old, replaced by Tiger Woods at the top of the rankings last month, has made an unspectacular start to the year with a top finish of joint eighth thus far.

However, he was one of the few players to reach both the 604-yard eighth and the 591-yard 18th in two shots.

He holed from 26 feet and 12 feet for birdies at the 16th and 17th respectively, but his 25-foot eagle putt at the last narrowly stayed out.

"I think that shows where my game is," McIlroy said. "Those two par fives are probably the toughest to hit in two with how small the greens are. It shows that my ball-striking is there.

"I definitely feel like I made the right decision to come here, and even if I hadn't been in this position and had been a few shots back, I'd still feel the same way," he said.

"I haven't really been in contention this year, so it will be nice to get into the mix."

Ian Poulter had a double bogey seven in his 75 but made the cut by a single stroke on one over, as did former Masters champion Charl Schwartzel, who double bogeyed the par-three 13th in his 73.

However, Welshman Jamie Donaldson, preparing for his Masters debut next week, missed the cut despite three birdies in his first seven holes, as a second successive 74 left him at four over.